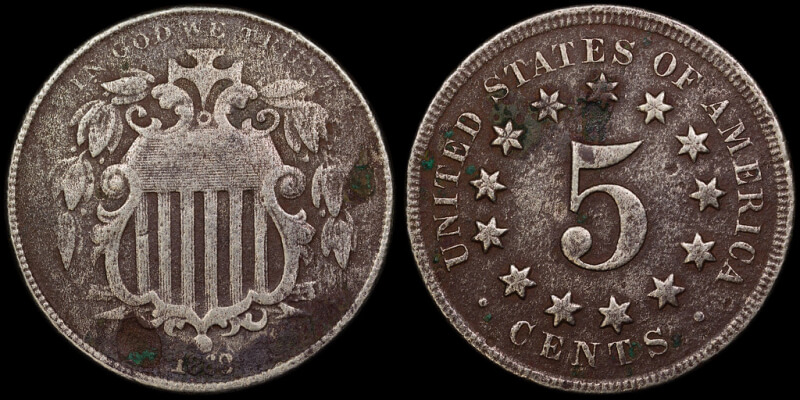 The nickel was made possible by the Act of May 16th, 1866.Ý The mintage of the nickel may seem obscure, when considering that there was already coinage of the same value in circulation(The Half Dime).Ý But during this period, there was an excessive amount of silver and gold hoarding, so the mint could not economically produce the half dimes.Ý The solution was to create a new coin of like face value, but of different materials, hence the nickel was born.

The first minted nickel was the Shield Nickel; its weight was set to 5 grams and consisted of a composition of 75% copper and 25% nickel.Ý The obverse was similar to that of the two-cent coin; It portrayed a shield with the motto: ‚ÄùIn God we trust‚Äù above the shield and the date below.Ý The obverse design remained consistent throughout its‚Äô mintage.Ý The reverse however, had two varieties.Ý The first depicted a ‚Äú5‚Äù surrounded by an alternating pattern of stars and rays with "The United States of America" positioned above, and ‚ÄúCents‚Äù just below the pattern.Ý It was minted from 1866 to 1867.Ý The second type was very much the same, except the rays surrounding the ‚Äú5‚Äù were eliminated, this was minted from 1867 to 1883.Ý Circulating coinage was not made in the years of 1877 and 1878 but only proofs were minted.

No further design modifications were implemented until 1883 when the Liberty Head Nickel was introduced.

I hope you found this informative and thank you very much for reading.

Well done. A pleasure to read and learn from you. Thanks.

Nickels were my first series. Nice photo of a typical shield nickel.

Nice blog on an interesting coin! ; )

Nice little blog here.... A very attractive coin to collect and one that is pretty much in reach for us all.

This is a well written post. I have a couple of these nickels. My last addition to my nickel collection was a 1883 Racketeer nickel, which I really liked. Thanks for posting a very informative blog!

Another good blog about a coin!! We learn from them and like this one it's enjoyable reading. Thanks for the information and reserch!

I've started a set of these but got distracted and started buying Merc dimes. I'll get back to them though...I've always loved the design. I'm also partial to the ones with die cracks.

Another nice blog for reading. The shield design has been a favorite of mine within the denomination for many years.