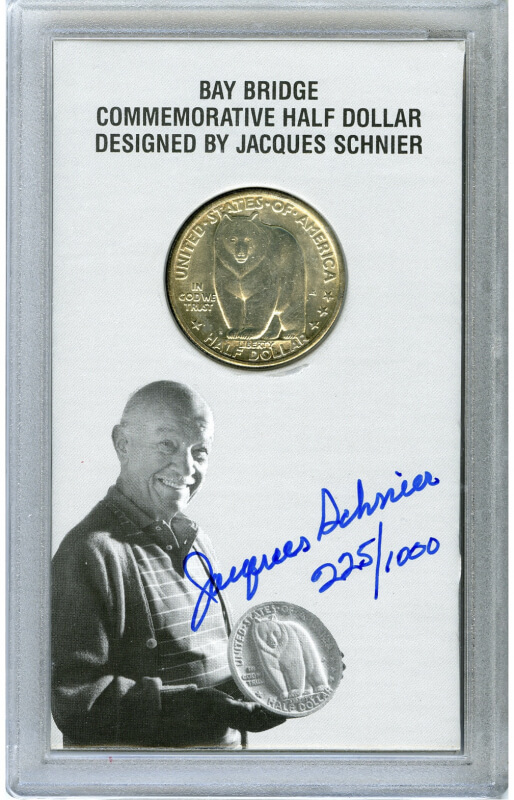 In 1936, theÝSan Francisco-Oakland Bay Bridge opened. It is one of the most famous bridges in the U.S. today. The same year they made a silver commemorative half dollar for it. This is my favorite classic commemorative.

I first saw this commemorative in Red Book and was interested in it. The design was beautiful and has a grizzly bear on the obverse, which symbolizes California. The back features the Oakland Bay Bridge. It was designed by Jacques Schnier, who lives in California, and is American sculptor and visual artist. This is the only coin he has designed, which is a pretty great coin, but he is known for his sculptors.

Originally in November of 1936 there were 100,055 Bay Bridge commems struck. Most of them were sold at drive- up booths at the bridge of $1.50. After that they melted 28,631 unsold commems and that left it with the mintage of 71,424. There are a lot of them and in really good condition. Most are in mint state condition and many have nice toning, luster, and/or eye appeal.

As I said in the title, this is my favorite early commem and may be my all time favorite commem. It has a good price range that is affordable for me and I‚Äôm saving up my money to eventually get one in around MS60-MS63 condition making it around $140-$175.Ý

Nice coin! I need to start delving into classic commemoratives. I really like the Oregon Trail half.

I really enjoyed your blog! I love the old commemoratives... The toned grizzly bear is a great choice! Hope you obtain yours one of these days! ; )

I was born down that way and as an adult, sort of, found myself crossing that bridge a couple of times a month. A beautiful bridge but driving over it on a bike, Harley, it felt like someone was grabbing my front tire and shaking it all over. I haven't been on it since it's repairs from the earthquake. I sure hope they fixed that. It is also one of my favorite commemoratives as well. I think it says a lot about California that it has the Grizzly Bear on it. An extinct animal in California. I keep looking for a nice toned one at coin shows but haven't found THE one yet. Nice job. Thanks.

I really enjoyed this. I'm a big fan of the old commemoratives. Great job . I wish the mint would go back to them.

beautiful coin! let me know when you get it!!

I had a chance to buy one of those signed/carded examples a few years ago but failed to pull the trigger. I have regretted it ever since. Nice coin, I hope you're able to get yours soon.

We all have regrets. Thanks!

MoKe! What was wrong with you? Too bad. It is awesome. Next time.