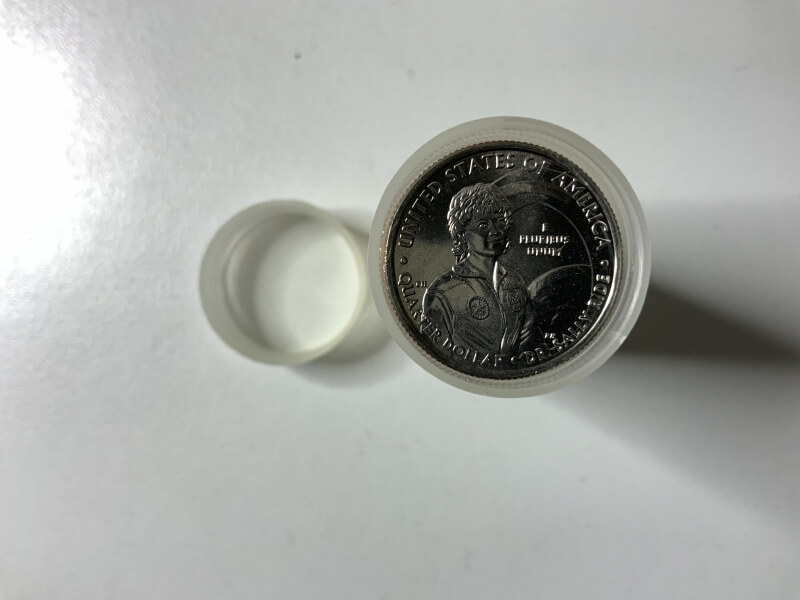 A few days ago I went to my coin club which has an auction. I brought a roll of the new 2022 Sally Ride quarters and wanted to sell them. I put a minimum bid of $14 on the roll and decided to look at the other lots. When I looked around there were around five Franklin Halves for only $10 a piece at minimum. I have a folder for Franklin's but didn't currently have one so I decided to bid on the nicest one which was 1962 (P) and it said on the flip MS-64.

I also saw a lot of two PCGS graded 2019-W quarters for $40 as the minimum bid for both. One was the War on the Pacific graded MS65 which I don't currently own and the other was the San Antonio Missions, which is a design I have, also graded MS65. I think the grade on the SAM one is fine but I think the WP should be MS66

The first I bid on was the Franklin which someone had already bid $10 so I bid $11 and won that lot. Then after waiting a while they got to lot 58 which was the two W quarters and won them for the minimum which was $40. Then lot 70 finally came around and I sold the 2022 Sally Rode quarter roll for $14.When I got home I put the Franklin in my Franklin folder and the slabs in the slab box.

The two W quarters in MS65 I would say are worth around $25. The Franklin I'd say is worth around $25. So I'd say I got a pretty good deal on my pick-ups and the roll I sold. That is actually my first coin sale.

I don't know when the 2018 Ukarine 10 Hryven will come but hope to see that soon! I will be sure to tell you when it arrives.

some really nice coins to add to your collection. selling the 2022 quarters from circulation for more than face value was a win.

Great job! You are doing so good with your coin collecting! ; )

Nice pickups, I have not found a W quarter yet.

Thanks, hope you find one soon!

Nice job on the W's! Now you just have to get the other three and you'll have a complete set for that year... Nice blog.

Good show my friend. You did well. Your right a a MS 66 will go for more money. That's what I have. There still out there!! Again good going at the club meeting. Keep up the good work!!

You did really well, Congratulations!!!!

Well done. Buy low and sell high. You got it. Well done.

I’d disagree on the value of the W quarters. I have seen most dealers sell (ungraded) MS-65s for $11. Nice job selling the quarters. I didn’t think those would sell!