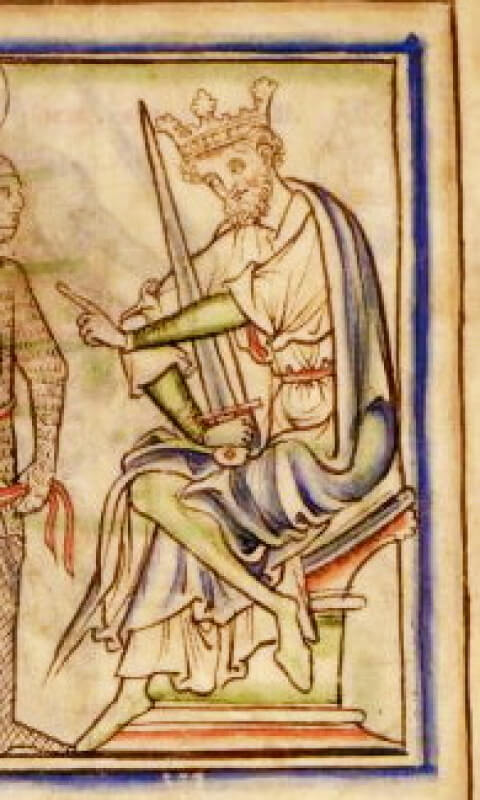 Here's an unexpected find at this month's local coin show. The picture could be better but it is a pretty good representation of what the coin looks like in hand.Harold I is not nearly as well know as his father Cnut the Great. This is probably because of his short 5-year reign and the fact that he wasn't the obvious successor to his father.
ANGLO-SAXON, Kings of All England. Harold I Harefoot.1035-1040.AR PennyDiameter: 17mmWeight 0.87 grJewel Cross type (BMC i, Hild. A). Suðgeweorc (Southwark) mint; moneyer, Leofric. Struck 1036-1038. +Obverse: HAR OLD RE, diademed bust leftReverse: + LEORIC O ((NN) SVÐG:, cross composed of four ovals united at base by two concentric circles enclosing a pellet.SCBI 40 (Stockholm), 532 var. (Rev. Legend); Hild. 924 var. (Same); BMC -; North 802; SCBC 1163A short history adapted from Wikipedia:Harold I (1016–1040), also known as Harold Harefoot, was King of England from 1035 to 1040. Harold's nickname is first recorded as "Harefoh" or "Harefah" in the twelfth century in the history of Ely Abbey, and according to some late medieval chroniclers, it meant that he was fleet of foot.The son of Cnut the Great and Ælfgifu of Northampton, Harold was elected regent of England following the death of his father in 1035. He initially ruled England in place of his brother Harthacnut, who was stuck in Denmark due to a rebellion in Norway which had ousted their brother Svein. Although Harold had wished to be crowned king since 1035, Æthelnoth, Archbishop of Canterbury, refused to do so. It was not until 1037 that Harold, supported by earl Leofric and many others, was officially proclaimed king. The same year, Harold's two step-brothers Edward and Alfred returned to England with a considerable military force. Alfred was captured by Earl Godwin, who had him seized and delivered to an escort of men loyal to Harefoot. While en route to Ely, he was blinded and soon after died of his wounds.Harold died in 1040, having ruled just five years; his half-brother Harthacnut soon returned and took hold of the kingdom peacefully. Harold was originally buried in Westminster, but Harthacnut had his body dragged up and thrown into a fen (marsh), as well as then thrown into the river Thames, but it was after a short time picked up by a fisherman, immediately taken to the Danes, and honorably buried by them in their cemetery at London.This coin reminded me of a question of have never seen addressed here. What is considered the cutoff between a coin being considered an ancient versus medieval?

One opinion is that anything after the fall of the Roman Empire is no longer an ancient coin. Still sounds pretty ancient to me. Since anything after the year 1600 is considered modern that means that medieval coins lasted for over 1000 years. Is that correct? I don't know but it would be interesting to hear other opinions.

Interesting blog. I learned a lot from it. I don't know enough about ancients to have an opinion. Thanks.

I think you can ask 10 historians when ancient ended and medieval began and get 10 different answers. My opinion is that ancient ends with the fall of the Roman Empire and modern begins at the renaissance, age of enlightenment, or whatever you want to call it. I have a friend in my local coin club that collects medieval Irish coins. Several of his coins reminds me of the coin you have pictured.

I enjoyed that very much. The history and your research were great. You keep finding these great coins. Keep these blogs coming. Thanks for sharing.

Having a coin from 1040 would be quite the coin. I would consider it medieval myself. Ancient to me is BC coins, but I am no expert. Just my opinion. Interesting story and history.

Wow, you have provided a great historical lesson here. I was aware of some of the names in your article, but I learned a lot. While I am interested in the medieval history and Renaissance history, I have no coinage from these times. Time to broaden my collecting interests. I appreciate your contribution!

Love your coin and the historical context. In my very humble opinion. Ancient Coins are no longer Ancient Coins when the byzantine empire falls. After that, they become medieval or modern coins.