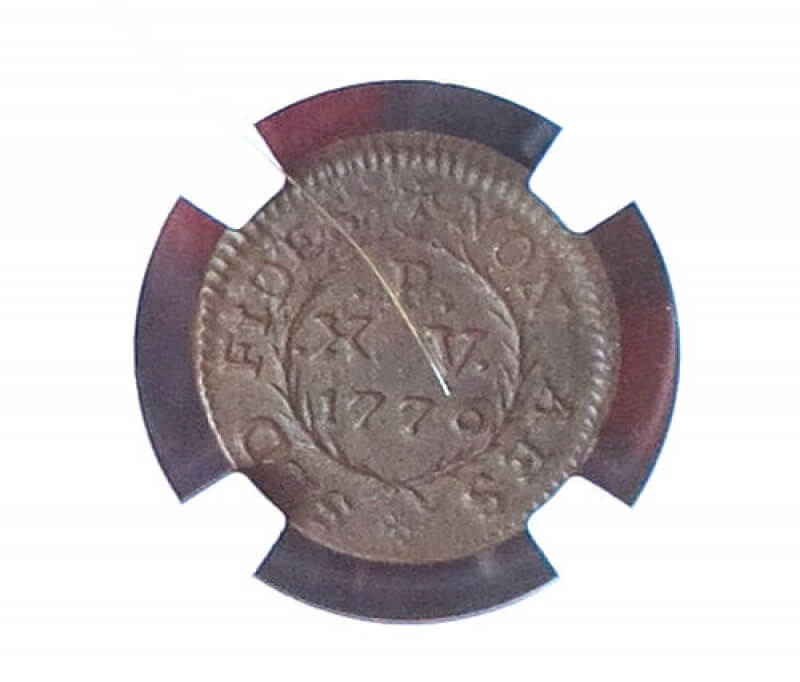 As hopefully all of us know 1776 was a pretty important year in the history of these United States. We all have been taught about our declaration of independence and other heroic acts from this period of our history. Obviously this isn’t the only important event that took place. Granted the world was watching what was happening but they weren’t frozen in place while we worked out our differences with Great Britain. This Machin’s Mills halfpenny is an example of this. Although a genuine coin many consider it a counterfeit Great Britain halfpenny. Although dated 1776 it has been determined that these were minted at a later date.

This evangelical church was built in Hessen Germany. The Wildman coin is also dated 1776.

On hearing of our declaration of independence Catherine the Great of Russia attributed the actions of Britain's former colonists to "personal fault" on the part of the British Crown in the form of its colonial policies. Moreover, the monarch believed "that the separation of the colonies from the mother country did not conflict with the interests of Russia and might even be advantageous to her." This government is known for large copper coins like the 5 Kopek piece pictured.

February 17 – Edward Gibbon publishes the first volume of The

History of the Decline and Fall of the Roman Empire.

March – Restrictions on the cereal trade in Sweden are lifted.

May 2nd - Doctor Adam Weishaupt, professor of canon law at Ingelstadt University of Bavaria, forms the Order of the Illuminati secret society

May 2nd - France & Spain agreed to give weapons to American rebels

I particularly like this French ECU because of the unusually large amount of adjustment marks. This coin is about the size of a silver dollar.

June 6th – A fire destroys major parts of the town of Askersund, Sweden

July 12th – Captain James Cook sets off from Plymouth, England, in HMS Resolution on his third voyage, to the Pacific Ocean and Arctic, which will be fatal.

The National Library of Malta, often known as the Bibliotheca (Maltese: Bibljoteka), is a reference library in Republic Square, Valletta, Malta. It was founded by Grand Master Emmanuel de Rohan-Polduc in 1776 from the collections of the knight Louis Guérin de Tencin. It has the largest collection of Melitensia along with that of the University of Malta. The library also contains the archives of the Order of St. John.

July 21st – Mozart's Serenade No. 7 (the "Haffner") is first performed in Salzburg, Austria.

Oct 26th - Benjamin Franklin departed from America for France on a mission to seek French support for the American Revolution.

October 31st – In his first speech before British Parliament since the Declaration of Independence that summer, King George III acknowledges that all is not going well for Britain in the war with the United States.

I included a piece of colonial paper money because this piece is dated 1776 and was printed for use in Delaware. I grew up in Delaware so this note one of my favorite numismatic items.

Look even better the second time around!

Truly nice story and photos. I find the photo with the cat whisker on top very relate-able. :)

I really liked your blog, World_Coin_Nut. Just a pleasant read from beginning to end. As refreshing as a tall glass of ice cold lemonade. Your blog really showcases for me how for a collector, it is not just the item being collected, but often where it was in history that brings it's true worth to bear.

Interesting blog! The photos are great!

Very interesting. Enjoyed it very much.

Very interesting. The 2 September hurricane hits are quite thought-provoking! Thanks for the history lesson and hot coin photos!

Nice info! I honestly never thought to find out what was goin on in the world at this time. Great references to numismatics as well!

Well I have to say this was of of the best readings I have had in a while. Just the history don't even look at the pictures of the coins. It's remarkable. The order of the way the history was written is excellent. Now look at the coins and put it all together. Absolutely wonderful. Thank you for your work very enjoyable.