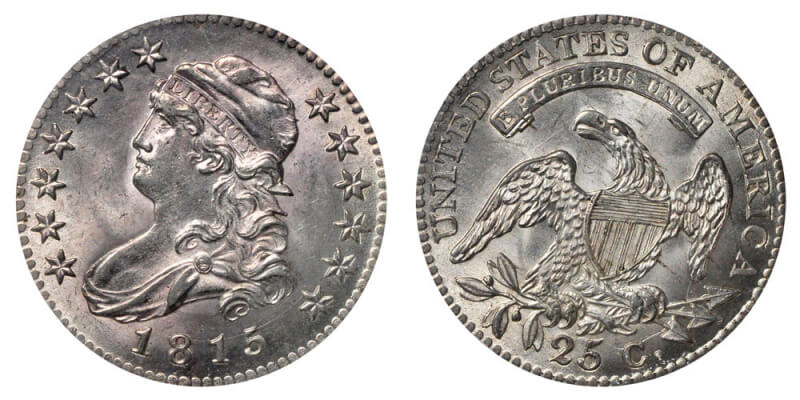 Out of all denominations coined at the mint only three out of the ten denominations were struck at the mint in the year 1815.  The war of 1812 probably caused this shortage in change.  The war of 1812 was fought between the Americans and the English.  England was already at war with Napolean so they were very stretched.  They decided to kidnap sailors from American vessels to use in their navy.  Long story short they got into a war and all the ports were blockaded.  That meant not planchets were coming from England.  If you own a "Redbook"  you will notice that there are now coins made from 1812 to 1814.  Finally the war came to  close in 1815 and the mint struck just a few dozen coins from leftovers.  The mintages of each coin during 1815 doesn't ever exceed 100,000 coins.       The lowest value coin to be minted in 1815 was the quarter dollar.  John Reich designed this coin it would be a type 1 Capped bust quarter.  These are my personal favorite of the two types.  All were struck at the Philadelphia mint.  The capped bust quarter weighs a bought 6.74 grams and has a reeded edge.  The 1815 capped bust quarter is the second rarest coin by mintages.  Only the 1822 has a smaller mintage. The capped bust quarter has the largest mintage of the three coins discussed. 89,325 were struck at the  Philadelphia mint.
Half dollars just barely made it into circulation with only 47,150 were struck.  All were struck at the Philadelphia mint.  During the war the British reached Washington D.C,  Barely any gold or silver was deposited at the mint for coinage.  Mint employees found an 1812 half dollar die in usable condition.  They punched a five onto the die and were ready to strike the 1815/2 half dollars.  The half dollars weighed 13.5 grams and the edge was lettered.  Fifty Cents was written on the edge.  These half dollars like the quarter were designed by John Reich.  The 1815 half dollar is only found as an overdate.
The final coin is the 1815 half eagle or 5$ gold.  This coins was designed by Robert Scot.  It weighs 8.75 grams and has a reeded edge.  Because of the shortages gold was very valuable.  The mintages of the 1815 half eagle show this as only 635 were minted.  The mint got so desperate that they melted almost all of the 1815 half eagles leaving only a dozen for collectors to enjoy.   These were also struck at the Philadelphia mint because it was the only government mint working.  All 1815 gold half eagles grade very high for an early gold coin.
Summing  it up. The war caused a lot of shortages especially with the coins.  No planchets were received from England so all planchets had to be leftovers or American made.  The 1815 Quarter Half and five dollar were the only coins minted during 1815.  30% were made or 3 out of 10. The highest mintages were well  under 100,000 coins.  All the 1815 coins are very desirable coins that came from a turbulent couple years of war.

History in your hands. Thanks for sharing the story.

Nice blog and research! Enjoyed it very much! ; )

Fascinating! Thanks for the info Regards Doug

Great blog! I enjoyed reading it! Thanks!

Really good blog. I am going to read it again now. Thanks.

Excellent subject and research to enhance it. Allow me to briefly fill in the blanks. Wars cost money, and the government began borrowing which drove up the national debt. This affected coinage production as silver and gold were the financial backing to treasury notes issued in large quantities, which by 1815 the government could not cover in bullion. Hence the low production of coin for commerce. It took until 1837 to pay off the debt incurred to fund a war.

Really great blog. Well researched and written. Thanks for sharing!