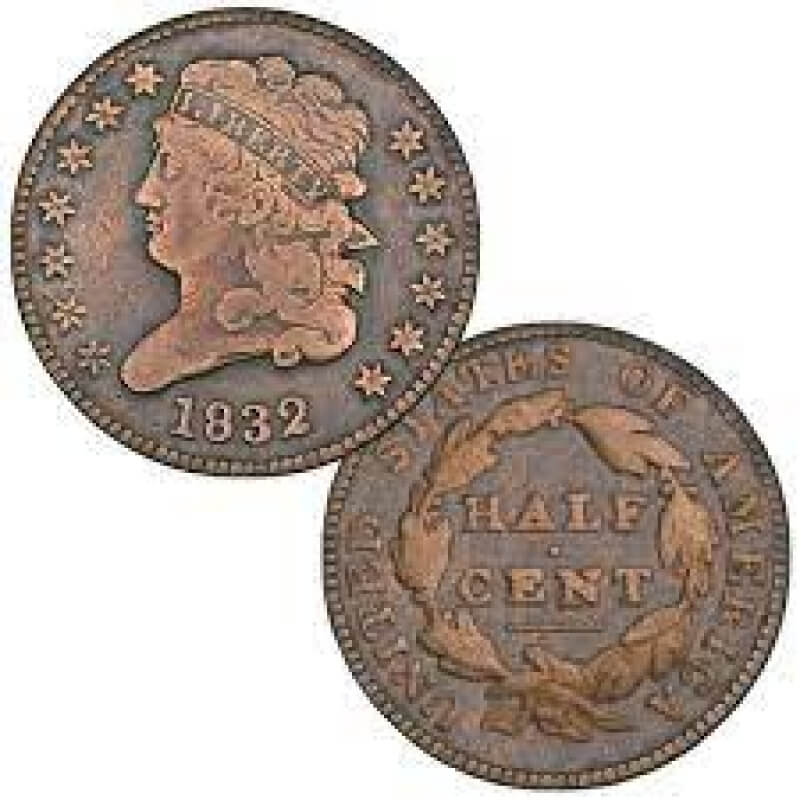 The half cent was one of the first coins struck.  It was minted in the year 1793 along with the large cents.  A type set would include 5 different coins.   Half cents were all minted in Philadelphia because that was the only mint open during this time.  They were made from 1793 to 1857.  A date set would have 32 coins in it.

Draped bust half cents are next.  Minted from 1800-1808 and all were minted at Philadelphia.  A different depiction of liberty is now used. Liberty is in the center of the coin now her hair has changed.  LIBERTY is written above her and the date below.  The reverse now has a different wreath.  But UNITED STATES OF AMERICA is still written around it and HALF CENT  is written inside of it .  The fraction 1/200 still is on the coin.
Classic head half cents were minted from 1809-1836.  Liberty is still on this half cent.  But instead of the word LIBERTY above her 13 stars circle her with the date underneath.  The reverse with the same design as an all other half cents besides the type of wreath with UNITED STATES around it and HALF CENT in it.
The final coin in the  half cent series is the Braided hair half cent .  These coins were minted from 1840 to 1857.  Coins from 1840 to 1848 were proofs. If you have ever seen a braided hair large cent then imagine making it half the size and there is your braided hair half cent.  In 1857 the half cent was discontinued.
The half cent was minted from 1793-1857 with a few breaks in between.  The half cent was also one of the first American coins to be made.

Great information. Iâ€™ve been working on a type set, but havenâ€™t yet gotten to the good stuff. I have 2 half cents (both 1828), but havenâ€™t found the right one for the set. Oldest coin in my entire collection is an 1803 Draped Bust large cent.

An excellent blog and fantastic coin series to collect. What I'd add is the reason for their existence. Prior to the striking of half cents, and long after the fact, the Spanish 8 reale was the world standard upon which currency was based. Broken into the pieces, literally, each bit had a value. An eighth being 12.5 cents. Once the shift to a more stable and acceptable U.S coinage occurred these became obsolete.

Wow! I need to read this blog again. A ton f well researched info to take in. Thanks.

Nice cent samples, fascinated with the 1793 item. Thanks much for sharing your information and findings. Best of luck.

Quite the coin to discuss, when you consider it one of the first coins minted by the United States Mint. And of course, the half-cent longer exists, as its denomination was determined to longer be a viable part of American currency. Appreciate you sharing the information. These are a little too old for my collection.

I LOVE old! The older the better!

Thanks for the blog and the information! I am a member of a Half Cent group on Facebook and I've been interested in collecting these.

I liked the blog and the information. I also like the coin. I have the first coin authorized by the United States the Fugio. But not this one. I have been looking. Thanks for your research and work. Another good one!

Very nice review of these coins, thank you! I enjoyed reading it