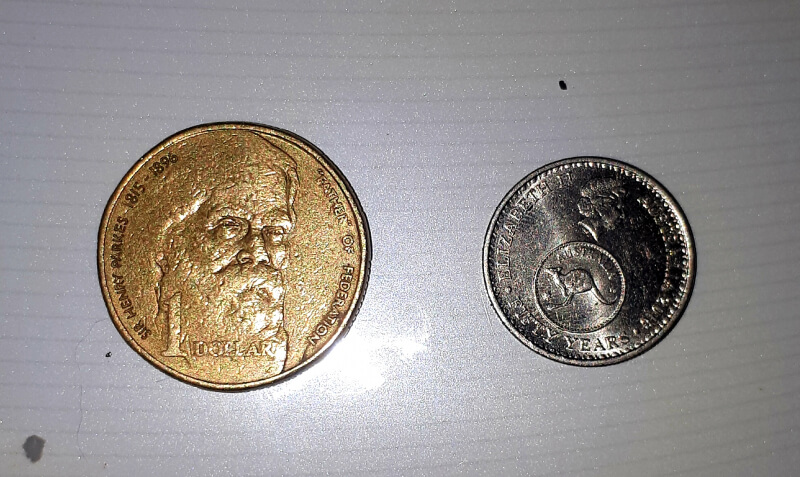 
And my second find in my loose change


50th Anniversary of Decimal Currency 5 cent
Obverse
Small version of the 4th portrait of Queen Elizabeth II facing right wearing the Girls of Great Britain and Ireland Tiara,
Reproduction of 1953-1964 1 Penny Coin with Kangaroo
Script: Latin
Lettering:
ELIZABETH II
AUSTRALIA 2016
FIFTY YEARS
AUSTRALIA
Designer: Ian Rank-Broadley
Reverse
Short beaked Echidna (Tachyglossus aculeatus)
Script: Latin
Designer: Stuart Devlin
Issuer Australia
Queen Elizabeth II (1952-date)
Type Circulating commemorative coin
Year 2016
Value 5 Cents
0.05 AUD = USD 0.037
Details
This coin was released into circulation by the RAM to commemorate the Changeover 50 years ago in 1966 to decimal currency in Australia.
The Reverse of the coin is the same as a standard definitive 5 Cent coin. The Obverse of the coin has a miniature Ian Rank-Broadly Queens Head and a representation of an Australian Penny coin as issued between 1953 to 1964. This coin was released into circulation in 2016 alongside the normal definitive version.
.

Why do the coin surfaces look so rough and pitted? Bad material? Aluminum Bronze????

Interesting coins. Thanks for sharing.

A coin to commeorate a coin! Perfect! I like that a whole lot better than most modern U.S. Commemoratives! Nice find! I'm curious: do women really glow and men thunder down under? It must be difficult to sleep at night with glowing women lighting up the bedroom.

Nice coins. Is this a "cut and paste" blog?... Kinda seems like it. How about making it more personal in your own words. ; )