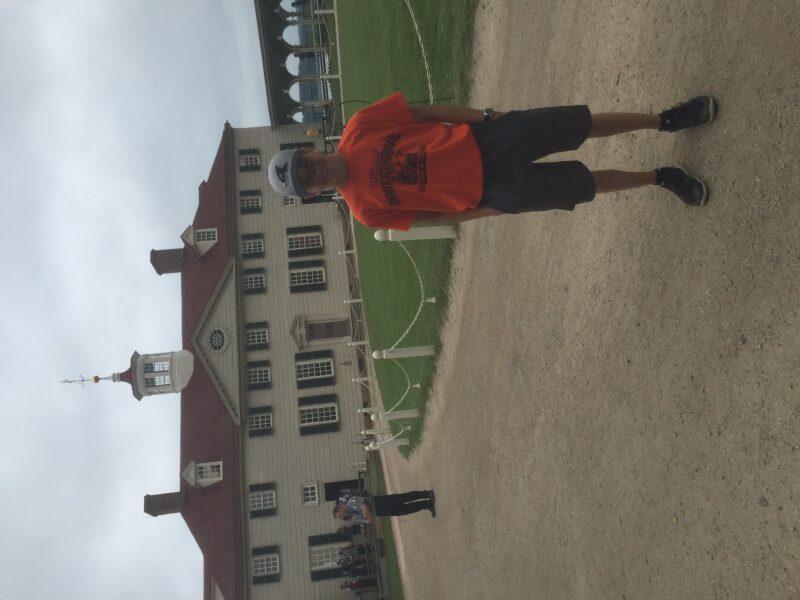 In the next month, I will be putting out blogs that tell about my trip to Washington D.C. Since we did so much there, I have decided to break up the trip day by day to include the most detail. Hope you enjoy!

Numismatic connections can be found virtually everywhere. Wherever you go, if you look hard enough, you can find a relation to coins. In our nation’s capital, it’s rich history and many attractions make it easy to find such numismatic connections. So, when I went on a trip to Washington D.C. with my school, I made sure to keep an eye out for things that had a relationship to coin collecting.

After a very loud and cramped 15 hour bus ride and a good night’s rest, we hit the road for our day stop. Our first stop was George Washington’s estate, Mount Vernon. Located on the banks of the scenic Potomac River, this site was one of my favorites, with the estate being surprisingly spacious. Highlights included George Washington’s mansion, the Washington’s tombs, and the living history demonstrations. The mansion is depicted on the Washington 250th Anniversary of Birth Half Dollar. The coin was issued in both proof and uncirculated finishes in 1982, making it the first U.S. commemorative coin to be produced after a 28 year hiatus. In fact, I own an uncirculated example of this coin, which made the visit that much more exciting.

Our stop at Mount Vernon lasted the entire morning, so after a quick break for lunch, we were off to our next destination, the U.S. National Archives Museum. On the way there, we passed the Bureau of Printing and Engraving, which prints all of our paper money and also produces intaglio prints for collectors. When we arrived at the Archives, I was very excited, much more than my peers, for one reason. We were going to see the original copies of the Declaration of Independence, Constitution, and Bill of Rights. Those documents are what this country is built upon, and they did not disappoint. The Declaration of Independence was faded and very difficult to read, but the other two were still very legible and very neat to view. In 1976, the quarter, half dollar, and dollar recieved temporary design changes to commemorate the bicentennial of the signing of the Declaration of Independence and the subsequent birth of our nation. However, the signing of the Declaration of Independence had been celebrated on a half dollar and quarter eagle in 1926 for the 150th anniversary. In 1987, the 200th anniversary of the U.S. Constitution was honored with a silver dollar and gold half eagle. The Bill of Rights was commemorated in 1993 on a silver half dollar, silver dollar, and gold half eagle. All three feature James Madison, the Father of the Constitution.

Next, we made a quick stop at the Grant Memorial for a picture in front of the Capitol building. There was not much to see, as the memorial was under renovation and not accessible to the public, but it shall be noted that Grant is pictured on the $50 bill and a 1922 half dollar and gold dollar. We then walked up behind the Capitol to take pictures in front of the Library of Congress and Supreme Court. The Library of Congress has two commemoratives, a silver dollar and $10 coin. The $10 coin is notable as it is the only bimetallic coin produced by the U.S. Mint to date, with an outer ring of gold and the middle being platinum. The Supreme Court does not have a specific coin to honor it, but it was still neat to see the place where decisions that influence our entire country are made.

In due time, we made our way to the entrance of the Capitol Visitor Center, where we took a tour of some of the building and looked at some exhibits telling the history of the Capitol. The Visitor Center had its own commemorative program in 2001, with the now commonplace clad half dollar, silver dollar, and gold five dollar coins. The surcharges from the program went to the construction of the Visitor Center. The Capitol itself had a silver dollar in 1994 with the rotunda highlighting the obverse. Congress also had a program in 1989, with a clad half dollar, silver dollar, and gold five dollar coin. On the obverse of the half dollar and silver dollar is the Freedom statue, which tops off the rotunda and is supposedly the tallest statue in Washington at 19 feet tall. Inside the Visitor Center there were more statues that were connected to coins. In the lobby, there was a statue of King Kamehameha I, who stands on the obverse of the 2008 Hawaii state quarter. On the tour, we passed by a statue of Caesar Rodney, the patriot and signer of the Declaration of Independence who is shown riding to cast the Delaware vote for Independence on the 1999 Delaware quarter. The tour also took us to the National Statuary Hall, a chamber in the building that houses sculptures of famous Americans. It was also the meeting place of the House of Representatives from 1807 to 1857.

The last stop for the day was Lincoln, Vietnam, and Korean memorials. They are all right next to each other, so we just walked between them. The first one we went to was the Korean War Memorial. I thought the statues really conveyed the hardships that the soldiers endured. The 38th anniversary of the end of the Korean War is honored on a commemorative silver dollar in 1991. Next, we went to the Lincoln Memorial, which was one of my favorite parts of the trip. After the long climb up the steps, we got to admire the huge statue of Lincoln and the amazing view of the Mall. We even stood in the very spot where Martin Luther King Jr. gave his iconic “I Have A Dream Speech”. The memorial is pictured on both the reverse of the cent from 1959 to 2009 and the back of the five dollar bill. After that, we walked over to the Vietnam Memorial. I was surprised to learn that the memorial wasn’t just the wall, but also consisted of statues honoring the men who served such as The Three Servicemen. The wall is pictured on the obverse of the Vietnam Veterans Memorial silver dollar from 1994.

It had been a long day when we got back to the hotel, and we were all very tired. However, we had only seen a fraction of what the city had to offer. I went to bed knowing that tomorrow there would be much more too see and many numismatic connections to come.

Thank you for sharing the story and images.

Thanks for sharing your adventures, places, people and all. Everyone should be able to visit them all and more at least once.

What a great vacation! Sounds like you saw alot of wonderful places! Thanks for sharing your experience!

Sounds like you had a good time and one concerning our nation's history. More people should visit our nation's capital. I want to thank you for sharing your story and pictures. I look forward to more. Thanks again. Mike