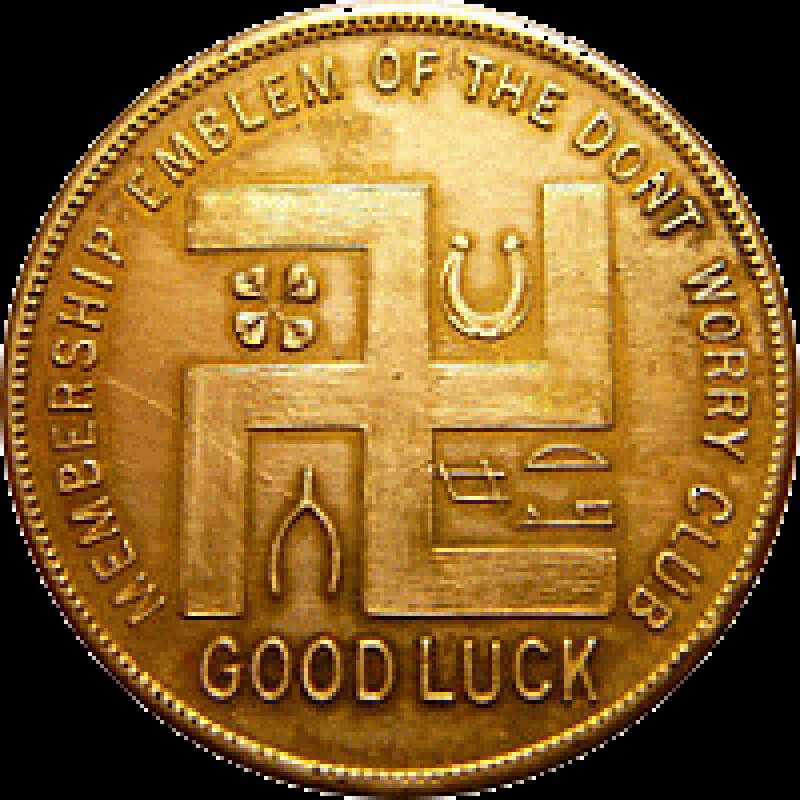 As a coin collector of many years, 46 or there about to be exact, on occasions something appears which you had no idea it existed. This weeks blog examines just that. To begin, the item at hand was found metal detecting by my nephew  this weekend past while doing archeological work for the Greene County, PA Historical Society. At first glance it is a safe assumption that seeing a large swastika "coin" would be a reference towards the Nazi Party and Germany. This would be incorrect as the symbol has held many different meanings over as many centuries. As you read on I'm certain you will be as amazed at how common and relatively inexpensive these fascinating pieces of metal are.  Enjoy!

In 1898 a gentleman by the name of Theodore Frelinghysen published a book entitled "The Don't Worry Philosophy" in an attempt to rescue Christianity and society by simply casting worries aside. For the strangest of reasons this book had a large following, in that the public began a movement based largely on this philosophy. So much so that local clubs began popping up across the country. Eventually several of these clubs consolidated to form the Don't Worry Membership Club on a national level. It was around this time, thus far I have not found a date as none exist on these tokens, that local business around the United States capitalized on the enthusiasm created by the club by having tokens struck for advertisement purposes. Many of these are from small, unheard of towns in nearly half of the states. Dots on a map if you will. Numbering in the hundreds, these Large Cent sized copper or brass tokens thrived until some time in the 1920's. Why they died out is somewhat of a mystery.

Since all of the known tokens share a similar swastika design with a shamrock, horse shoe, wishbone and hieroglyphs (each varying in placement from token to token) this should be the obverse. The reverse has the business name and product/service.

I tried to get a clear picture to post of the token found, but from being buried for many years it does not quite show for intent. So the two photos were taken from an internet search. If this is of interest, further reading and information including photographs can be found at the following link. Thanks for reading and go find something odd and unusual!

Very interesting piece of Exonumia. Thanks for sharing the history to the community blog.

This was certainly a history lesson for me today ! Very interesting ! Thanks for posting Long Beard !

Interesting club. We could use that now. Thanks.

I have a couple of these (badly worn) in my junk box but I've never heard the whole story behind them until now. Thanks. The advertisers make these an interesting series. Wonder if anyone ever published a reference book on them. Have to check the ANA library. I believe the Nazi party reversed the swastika for their use.

Not sure about a reference book. The link at the bottom of the page takes you to a site with pictures and information. Or you could just Google "Don't Worry Tokens" which was how I found these.

Wow, an interesting concept, I will have to look for one of these. Thanks for sharing!!!

Your forum post on National Notes entered my mind as I wrote this weeks blog. Interesting indeed.

I just packed up 24 beautiful tokens. There on NGC registry set were i display them with a write up. There from Great Britian. If im rite that symbol is a meaning of peace or somthing used by the early Chinese. Or Japinese . Actually it started 12,000 years ago and stands for different things in different cultuers good fortune was the sun of Visnhnu. .Thanks. Enjoyed it.

Interesting piece and pretty good condition for having been buried.

The one picture was pulled off the internet. I'll see if my nephew still has the photo on his phone and I'll add it. He also found a Two-Cent and some various silver at the same time.

Tokens are fascinating to me. Just wondering what purpose they served and who used them. Sometimes you know how they were used and sometimes you dont know there purpose. They are like collecting salt and pepper shakers. You could collect hundreds and never have but a fraction of the total number created. The dont worry club should make a comeback. Thanks for the post.