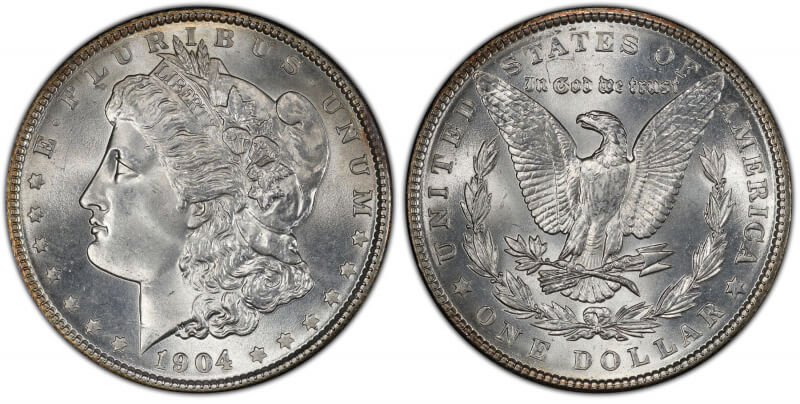 Any one who collects Morgan Silver Dollars has at some point heard of The Pitman Act.  To those, and any collector who does not know, this highly important Act has been loosely understood beyond it's purpose of melting silver dollars into bullion ingots as enacted by Congress and signed into law by then President, Woodrow Wilson.  The Pitman Act of 1918 is the subject of this week's blog.                  Enjoy!

Europe was now in it's fourth year of a war which had begun in the summer of 1914.  With a stalemate brought about by trench warfare, Germany had found it's self in a slugfest with Great Britain and her allied nations.  Unable to gain any real momentum and ground on the battlefield, Emperor and King, Kaiser Wilhelm sought to attack Britain on an economic front.  With agents, spies and those sympathetic to the Prussian (German) cause scattered about Europe and the British territories throughout the world, a well planned and orchestrated counterfeit scheme of various currencies began appearing in large numbers slowly but surely destabilizing the intended economies. India, in particular, where spies were ordered to spread the rumor that Indian bank notes could no longer be backed by British gold. Panicked, the local banks almost overnight had seen a widespread run on many banks, citizens exchanging paper notes for hard silver coin.  Silver because Great Britain, and other European nations, had suspended the coining of gold for commerce in 1914.  In effect, likewise suspending the gold standard whereby notes could be exchange for the metal.

In the United States, remaining neutral for three years,  many banks were making loans to the Allies in Europe as well as businesses sending supplies and equipment.  Woodrow Wilson, who had narrowly won reelection the previous November running on an anti-war campaign,  could no longer remain so by the spring of 1917.  Germany had resumed unrestricted submarine warfare in an attempt to disrupt the trans-Atlantic supply chain, which it had by attacking and sinking U.S. ships.  On April 2, Wilson delivers in a joint session of House and Senate he proclaims that the world must be "made safe for democracy" and asks for a declaration of war.  Soon, the United States would find it's self squarely in the middle of war it had been ill prepared for. Initially relying on British and allied equipment and  munitions, falling short due to a war of this size and scope.  However, with an ocean between the two continents the economic might quickly allowed businesses to produce what ever was required without fear of the bombing occurring overseas on their factories. Unlike Europe, and with a booming economy, The United States had continued striking gold coinage with the free exchange of federal notes until 1916.  With the nation at war by 1917, that changed with the suspension of production only,  allowing for the exchange with a premium.  The reasoning being that wars cost money.

In Great Britain, the economy had been weakened, primarily with a near collapse of the Indian economy. Inflation had spiraled out of control, widespread food shortages and bread lines were common.  With a large portion of the male population across the channel and elsewhere fighting factories were idle or struggling.  Unwilling to allow the British to collapse economically and leave the war, talks began between the two powers in late 1917.  It was Democratic Senator Key Pitman (Nevada) who proposed a bill aimed at loaning the British enough bullion to back their currency and stabilize the markets. The Pitman Act of 1918 passed on April 22 and was signed into law the following day, whereby up to 350 million standard silver dollars would be melted into ingot at the cost of one dollar per ounce.

If you are still following, the aforementioned address what lies below the surface of this law. First, and foremost, the actual title of the Bill.  An Act to Preserve the Gold Supply of The United States.  While Great Britain had by account taken it's self off of the gold standard, and the U.S. had not, silver was the alternative to at least back it's paper notes, which they somewhat reluctantly agreed upon.  From the author's personal observation,  the very Bill's sponsor,  Key Pitman, was from the silver mining state of Nevada and nestled within the wording there is a provision requiring the future production of standard silver dollars equal to those melted.  As one who has little belief in coincidence I leave that to you to make judgement as to why silver and not gold. As for fractional coinage, the dime to half dollar, these were excluded and saved from the melting pot because the war effort created a booming economy.  With such a large amount of silver entering the market the value was surely to rise accordingly, which it had. Yet with such a strong economy, domestic hoarding would not become an issue. As for outside of the U.S., steps were taken to stabilize and control the markets. One such implemented by the United States Postal Service, where by it became illegal to send coinage to foreign nations.  Which effected collectors, primarily to north in Canada.

So, how many Morgan Dollars were suddenly gone forever?  While an actual number will likely not be known, nearly all sources tend to have the same figure. 270,232,722.  Renowned coin expert Q. David Bowers estimates that roughly 15% of all Morgan Dollars remain.  To put into perspective the sheer number of silver dollars melted, if all were stacked one on top of the other it would reach a height of 400 miles.  Finally, I'll leave you with the official 1918 United States Treasure Annual Report, ending June 30.  The total number of standard silver dollars reclaimed as bullion stands at 68,753,583.  The primary melting being conducted at the New York City assay, followed by Denver and San Francisco refined 51,651,932 combined. Several other little unknown assaying facilities also contributed, such as Seattle, Carson City, and Salt Lake City refined the balance of 17,101,651 . Refining 15% above the previous year the stock had been depleted by 22.5%.  As for coinage operation for commerce, the three mint branches were running at 16-24 hours or 17% above the previous year.  Perhaps the greatest unknown, having read this in it's entirety, there is no mention of dates nor mint marks melted. Once again, your's truly is speculating.  With the amount of silver discovered and mined out west, the politicians of said states forced the Treasury to produce record numbers of coin despite an actual need for commerce. So as these sat idle in vaults over many years, each year being added, common sense dictates that the oldest would remain in the back and last to be used. Or in this case, melted. Carson City sent what remained in their vaults east to Philadelphia sometime after closing, and this perhaps, explains the number which showed up in the 1970's as GSA's.

If you are a Morgan Dollar collector, or simply enjoy history, I hope that this enlightened you. Myself, and I hope you'll be hard on me, I think it is the worst design of all circulating U.S. coinage.  That rubber chicken reverse is God-awful hideous. So the image is courtesy of PCGS Coinfacts. The research is taken from actual government records found on the Newman Numismatic Portal.  That was the most fascinating three day read I have had!

Great subject! You blogged this interesting history really well! Enjoyed reading about all those silver coins being melted away... ; (

I've been wanting to do a blog on this subject for a long time. I don't think I would have done as well job on it as you. Excellent work. Thanks so much. A lot of work went into this.

You are right about the number of Morgan Dollars melted. Imagine today if they weren't The prices would be different. Myself I believe there should of made them with one ounce of silver. Thanks for another great blog. It will bet a second read. I enjoy them but the history always gets me!

Very informative, thank you for an interesting history

Good read and informative! I will always wonder how many 1893-S Morgans were melted due to the Pitman Act.

Very nice blog, I enjoy collecting Morgan Silver Dollars and I myself don't care for the scary looking bird on the reverse.

Yes I had heard, and knew a little, but thereâ€™s a lot of great information there. Excellent research & blog! Fitting title as well!