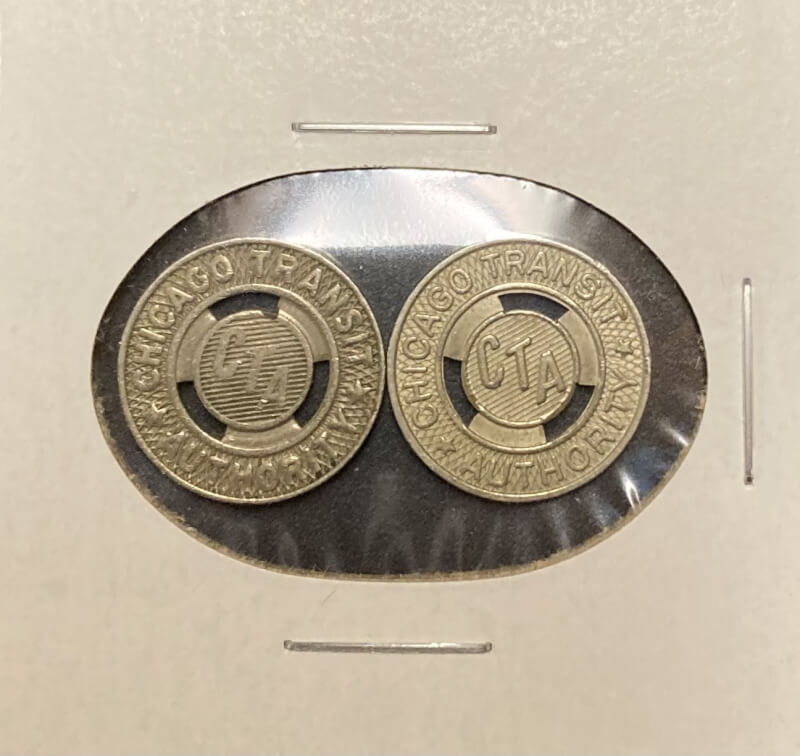 UPDATE:  The Smithsonian Institute has one of these tokens in their collection as part of their National Museum of American History.  According to their website, these tokens were made in the early 20th century by the Scovill Manufacturing Company of Waterbury, Connectictut.  Scovill made, among other things, buttons, tokens, coins, and medals... and staplers, as my mother had a Scovill stapler at her desk for many years.

Recently found these two tokens in a group of donations to the Legacy Knights Numismatic Society's YN auction.  They are Chicago Transit Authority tokens.  At first I thought they were two of the same, but upon closer look, they are two different varieties.

I put them together in an elongate 2x2 to keep them together for comparison.  Since I can't tell obverse from reverse on these, I'm calling the side with the staples Side A and the side with the staple legs Side B.  If you look at the staple positioning from photo A to photo B, you can figure out the orientation of each.  I flipped the 2x2 over like turning a book page (side to side)... so the first variety is on the left in photo A and on the right in photo B and vice versa.

The second one has the same design on both sides:  "* CHICAGO TRANSIT * AUTHORITY" surrounding the monographic "CTA".  This version has neither a coin orientation or medal orientation (although it is closer to coin orientation).

Some off-the-cuff observations I've made before looking into any sort of reference on these tokens, based on my limited knowledge of coin and token manufacturing:

1.  I don't know which of these was minted first; but based on a general principle that as time passes cost-cutting measures based on simplification are employed, it would seem to me that the one with different designs on opposing sides would be an earlier variety, as making two different hubs for dies would have cost more than making duplicate dies from a single hub.

2.  Because of the haphazard orientation of the variety with the same design on both sides, I don't know if the coin orientation on the "surface system" variety was intentional or accidental.  However, the lack of orientation on the duplicated-design variety might have been part of a cost cutting measure (if it indeed was a later variety).

3.  Both sides of the duplicate-design variety appear to be struck with dies from the same hub, unless someone else can spot die differences.

4.  The Chicago Transit Authority design differs from one token to the next, indicating their dies were made from different hubs.  Note the size of the stars from one variety to the other.  The stars on the duplicate-design token look smaller than the bold stars on the other variety.  Compare the positioning of the web of squares behind the stars and letters also.  There are lettering differences also.

5.  At this point I haven't figured out if the slotted holes were put in the blanks before, after, or during the striking process.  I haven't seen any known error versions of these tokens or studied how these types of holed tokens are made.  Does anyone else know?  If so, please tell me in the comments.

As mentioned above, these were donated to our club so they will be going in our annual end-of-the-school-year auction.  Some LKNS YN will enjoy them.  Maybe they will figure out more of their story.  Please post any additional info you may have about them in the comments.

Lovely Entry, we had a full collection of NYC Subway tokens tha were all stolen from the house. But they were some of my favorites.

Those are nice. I recently saw some Denver tokens close to yours.

These are very cool! Interesting holders! ; )

Great looking tokens. I enjoyed reading about them, but have never seen any like them before. Thanks for sharing!

Nice! Like yourself, I buy the odd and unusual when it strikes my eye. Perhaps there's a token society where you could find answers?

Nice tokens. I don't have any information to help on them. Someone from LKNS may become a collector of transit tokens for years after they win these. Amazing how we all go our unique road of numismatics.

Quite a relic to own . Congrats . Back in early 70s there used to be required tokens to use and play in game rooms. Tokens tell stories.

I have two the same size if not smaller. One from the N.Y.C. Transit system And one to small two read with a loop!

Never seen them before.

Very cool. I have never seen those type of 2x2's before. I like it. Thanks.

I got a bunch of them from the local coin shop after ordering 100 elongated cents from a dealer our club met at the PAN show. There are narrow-windowed versions that fit elongated cents well, but since nickels and other denominations also get elongated, these fit more varieties. They make flips with 2 and 3 windows for cent-sized coins also, but I already had these, and these tokens fit nicely I thought.

Maybe the dies that struck the tokens also punched out the voids. (: Merry Christmas and Happy New Year to You, Your Family, and All the Club Kids. I am looking forward to visiting next March.

We look forward to your visit as well!