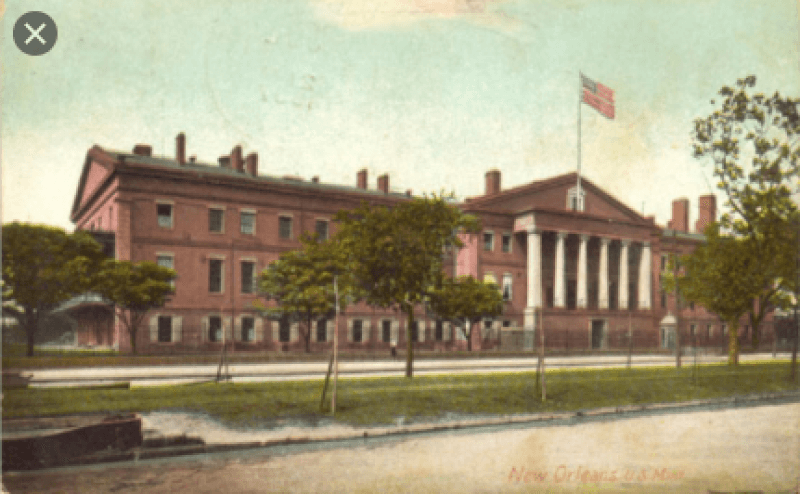 Ironically, could the band Katrina and the Waves be a poorly timed omen for the Hurricane of the same name? Katrina itself didn't kill, but horrible planning by the government and the following storm surge (waves) killed. I still do like the song, Walking on Sunshine. Anyways...

Welcome back to our tour of the United States. And today, we leave the land of bourbon and 10-second baseball bats to a flat land, land of mosquitoes, and Creoles. Welcome to 8 below sea level, everyone. Welcome to Louisiana.

Louisiana was first settled by the Indians, a few thousand years after crossing from Siberia into Alaska over the Bering Land Bridge. The first European explorers to visit the state were the Spanish, under Panfilo de Narvaez, located at the mouth of the Mississippi River. Robert Cavalier de La Salle soon came to Louisiana and named the region the name for the king, Louis XIV, the Sun King. In 1762, Louis XV gave the Louisiana Territory, proving one of the hardest places in the world for Europeans to maintain, to Charles III of Spain, knowing the war in America was turning against the French. After Thomas Jefferson became President, he set his sights on New Orleans, which was further complicated when France got the the territory back in the Preliminary and Secret Treaty between the French Republic and His Catholic Majesty the King of Spain, Concerning the Aggrandizement of His Royal Highness the Infant Duke of Parma in Italy and the Retrocession of Louisiana, otherwise known as the Third Treaty of San Ildefonso, which screwed Spain into Napoleon's hands, and allowed France to begin the French-ifing of North America. Alas, with the slave revolt in Haiti, led by Toussaint L'overture and the future Emperor Jacques I of Haiti, Napoleon was forced to sell New Orleans and Louisiana to Jefferson.

On April 14, 1812, Louisiana became the 18th state. In 1860, Louisiana left the US, only to be defeated when Admiral David Farragut captured New Orleans in 1862. After the war, violence arose in the state, with the KKK and White Leagues invading the state. In 1928, super-powerful Democrat Huey Long became Governor of Louisiana, followed with service as a Senator. In 1935, the major opponent to the New Deal was assassinated with 60 shots to his body. When WWII began, the state mobilized, but many workers, white and black, left of California. In 1970, Louisiana ratified the 19th Amendment. In 2005, Hurricane Katrina ravaged New Orleans, and in 2016, a storm over Baton Rouge destroyed 110,000 homes. Today, Louisiana is known for the wetlands, creole culture, and many, many mosquitoes that roam the area. Famous citizens include Claire Chennault, Thaddeus Young, Andrew Young, Kate Chopin, and Huey Long.

First to mind are the 50 State and America the Beautiful (ATB) quarters. On the 50 State Quarter. Is a renditioning of the United States, with the French Louisiana Territory, memorializing the central state to the purchase. To France and America, the only thing that mattered was New Orleans. The rest of the land was dead waste land. A Blank spot. Also, on the quarter is a pelican and a trumpet (or cornet, whatever). The quarter was released in 2002.

On the ATB quarter, is -sigh- another bird. It is the wild turkey, victim to the hordes of people, sitting in a neat row, on Thanksgiving. The site itself is Kisatchie National Forest, the online national forest in Louisiana. The design features wetlands and a swamp, like its larger brother in Georgia, Okefenokee NWR in Georgia.

In 1903, came two commemorative coins commemorating the Louisiana Purchase. They were the Jefferson Gold Dollar, and the McKinley Gold dollar, making these some of the smallest commemoratives the US Mint has ever put into production. The designs are self-explanatory, with sufficient busts of the two men and a rather bland reverse, with Charles Barber working on George Morgan's designs. This suite of coins was done for the Louisiana Purchase Exposition, in 1903. This event also spurred the 1904 Olympics in St. Louis, and the birth of the Ice Cream waffle cone. There you go. Coins, Sports, and portable ice cream holders. What more could you ask for? If you would like to buy these, go ahead and tell your credit card company you are making a large purchase. A MS-65 will set you back $1,300.

To New Orleans now, were after eating too many Beignets, we are back in the car and to the site of the New Orleans mint, which is now a jazz museum. The New Orleans Mint was the first branch mint, opened with Charlotte and the Dahlonega, GA mints in 1838. The Mint has been owned by Confederates and was captured in 1862. In 1879, coinage rebegan at the mint, and the mint in 1907 struck Mexican twenty-centavo pieces. These pieces coming out of New Orleans were not known for their quality. The mint closed in 1909.

Thanks, and we will see you later on our tour of the US!

Very informative blog, nice work! And I know, how come so many ATB quarters feature birds? Well, it is what it is.

The New Orleans mint is my favorite of the seven U.S.branch mints. So much so, that sometime in the early eighties I began a daunting task of assembling every business strike produced by that mint. At the present, I'm about two-thirds complete. On the Katrina subject, in the early hours after it passed to the north, there were Blackhawk helicopters circling the city. Not so much to rescue civilians as to protection of the former mint from looters.

Louisiana has probably the second richest history of the united states. It made the country what it is today, and shaped world relations for centuries.

Never have been to louisiana! Hope to get there one day. I love these blogs, and look forward to the next one! Cya 'round!

Never been to Louisiana. Thanks for showing us around ! Great food and coins down there !

Always wanted to visit New Orleans but the rest of the State? No Thanks!!! Great Blog!!!!!

My dog is the State dog of Louisiana... Catahoula Leopard Dog ; )

I think those turkeys people dine on are almost all farm raised. There are plenty of wild turkeys, I see some every few weeks around the property and farms here