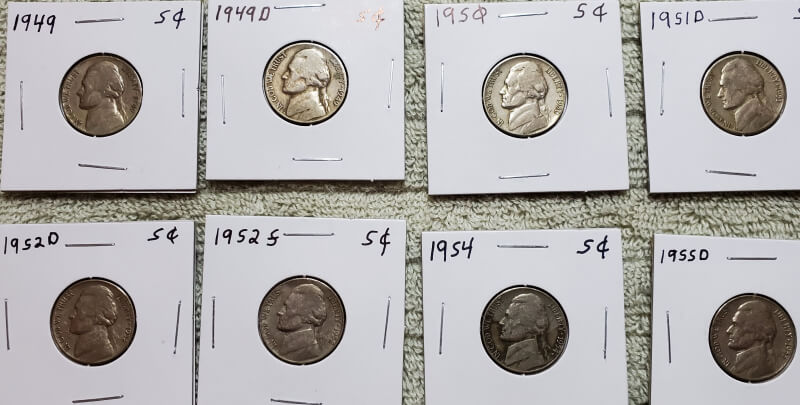 I carefully reviewed each response from my plea for help last week.  I separated the nickels into five stacks;

Stack 5, coins that I did not think could be salvaged at all

Stack 4, coins that could probably be helped out some but would always be sadly marked or toned

Stack 3, coins that with a bit of patience & careful soaking might be restored

Stack 2, coins that with a bit of patience & careful soaking should be restored

Stack 1, coins that I did not touch at all due to their current nice state.

I am happy to say the project was a success overall.  Some of the problems I encountered were

Please note that some of the coins are badly scratched, some deeply toned, I did not create or add to this.

Some of the coins received a distilled water bath for days, some were placed in acetone as recommended.  None of these coins were brushed, wiped, or picked at with anything including a cactus thorn.  Some were very, very lightly wiped with a Q-Tip soaked in distilled water.  Some didn't even need that.

They were placed on a cotton towel in a heated room (temp 69 degrees), both sides allowed to completely dry.

After that they were placed in individual 2x2 coin holders, labeled & placed in a separate box on my everyday shelf.

My 1960 nickel was one placed only in distilled water, it cleaned up nicely, still stained in front of Jefferson's nose and chin, but get this, it appears to have slight doubling on the reverse, some of the letters of Monticello seem to be slightly doubled, especially viewable with the M, o, n, t, e, l, and the last o.  I could be incorrect but it still looks that way, more so under a 5x than a photo.  Please give me your opinion.

Of the 74 coins, there were some extras, 33 of them came out within Stack 1 or 2 standards. Of the 41 coins remaining, 31 others fell withing Stack 3 or 4 standards, sadly, the remaining 10 were not salvageable.  They remain "Junk Yard Dog Ugly".

I tried to take individual photos, especially of the 1960 "Monticello" doubling coin, but I just can't get good enough photos.  When my son is in town, he may be able to take em, who knows, please see the photos I was able to take.

Thank you guys and gals from the bottom of my heart for the great advice.  While these coins will never grace a great collection, they can and will be used to encourage some young family members by my being able to contribute them to their collections.  They can upgrade them when they are older if they wish.  I could not have done that without your assistance, the coins were in terrible shape.  Thanks again... Nuff Said!

This is interesting... As a side note, when I feel (rarely) that I need to clean something from a coin gently I use Xylenes. It's like acetone but even safer and stronger on the surface (and MUST only be used with excellent ventilation since it smells like Amyl Nitrate as it evaporates and it evaporates FAST!) on especially biological matter....things learned from a PHD Chemist Papa :-) Thanks for sharing your results.

I think they look pretty good. I would be proud to have those in my collection! That's a pretty interesting experiment. Does it work on copper too? Enquiring minds want to know! Great post buddy!

Sounds like you made the best choice! Glad everything worked out for you, and now I might try this with some of mine! Cheers, NM

Sounds like an interesting project. Even lowly coins can stand TLC

Looks like you did a good job! I don't have much experience with double die Jefferson nickels, so I'll have to leave that to the other members

Glad that you had success! I'm surprised so many turned out as well as they did.

Looks doubled to me. May be machine doubled. Hey!, I said a cactus thorn to loosen stuck gunk. It works. Just nothing metal. Glad it worked out. Science experiment. Science Rules!!

The coins were stained that yellowish color from the tape residues and other things that they were exposed to before I started cleaning them, the poor lighting doesn't help, it makes it look worse, although it is clearly obvious. All I used was distilled water & Acetone (no finger nail polish), separately. Nothing else was used. The yellowish color is also on some of the coins that were soaked only in distilled water. The coloring was one of the problems, hence their only use as a starter coin for a beginner that can be upgraded later. There was no solution, poorly worded is all. I corrected the poor wording. Sorry bout dat.

It does look like the Monticello is a little doubled on the 1960, and the letters do also, since I not finding a 1960 DDR on NGC, and since not everything is doubled, I would say it is most likely just machine doubling, but still cool! Over all it looks like your project was successful! Have a great day!

Awesome! Glad you had very good results.... What was the solution?

Quite the project you had going. Thanks for posting the results. These will make a nice gift for your young family members. When I was young I was always excited about coins. Include a couple books also for young collectors. I was always fascinated by mintages and hard to find coins. Great work.

I agree that distilled water helps. I never seen a nickel with that type of color. We're they in a solution? And what was it. Nickels leave a hue light gold and blue and there only nickels that are Matte. Some look very good. Thanks for the results. That's some nice work . Thanks for sharing that we us!!