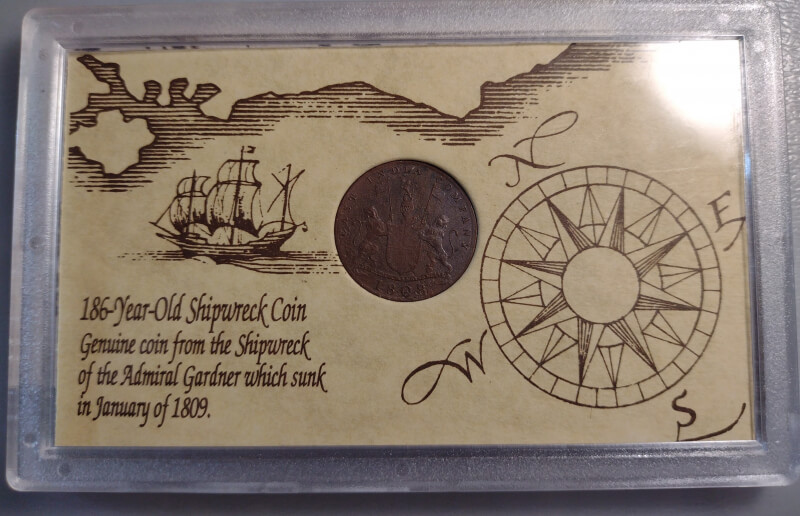 This coin was a recent, and awesome addition to my collection! It is an 1808 East India Company Cash coin, that was onboard the "Admiral Gardner" when it sank.

The coin was minted in Birmingham, England. On January 25th, 1809, the "Admiral Gardner" set sail through the English channel. Its destination set for Madras and Bengel, India. Only a short time after there journey began, a violent storm hit the Channel just off of Dover. The captain, William John Eastfield, and his crew, tried there best at riding out the storm.

Sadly, it ran aground the Goodwin sands off of South Foreland. By the next morning, it had sunk. It is unsure how many crew died, but it is estimated that anywhere from three to five drowned. The copper coins that where being hauled were owned by Matthew Boulton, and English manufacturer. Now, they were at the bottom of the sea.

The ship itself was built in 1796, and commisioned in 1797, where it served twelve years on the open seas. The "Admiral Gardner" was one of three other ships that sank during the storm. The ship was named after Alan Gardner, a British Royal Navy Officer. The East India Compan ( EIC ) estimated the total loss at ÂĢ21,579.

The wreck was eventually rediscovered in 1984, and some coins were slavaged in 1985. It is a Protected Wreck, and is managed by Historic England. Now, in 2022, after spending 176 years at sea, and 37 years in the market, it ends up in my hands. This 214 year old relic, is something to behold. The coin is defineltey not that valuable, but the story was worth the money!

The case holding the coin was made in 1994, so it says 186 year old shipwreck coin. It also comes with a certificate of authenticity. You can find more pictures on the actual collection. Such a cool coin!

I did see one at my local coin shop but decided not to purchase it.

Really like the coins with a story. Nice coin and history. Thanks for posting. Very interesting.

An outstanding piece! The East India Company actually dominated the globe hidden behind the British crown. The proverbial power behind the throne. Their coinage spanned centuries and nations.

Ever since early 1600's and way into the 1800's the floors of the Caribbean Seas have been bursting with shipwrecks and their treasures. The great agency National Geographic Society and the Jacques Costeau Foundation, among others, have been eagerly protecting what has been found to date since the 1970's. Yours is a magnificent coin and blog. Thanks. It would be great for you to give yourself an avatar and nic to be known, something you like and identify with. Never give up. Good luck.

Dear 84095, go to My Account, check the + then, loof into your Privacy Settings. See your nic. Your slug# and your account or profile data. The avatar can only be uploaded from a desktop... good luck.

I still have no clue how to put up an avatar or change my users name. I will keep trying to experiment with the settings.

I was right Matthew Boultin was the owner of the Soho mint. He handed it of to his partner. They made the coins. Its a great story and history. I enjoyed it. Nice addition to your collection!!

Great coin and amazing history! Thanks for an interesting, cool blog! ; )

Cool coin. I have one shipwreck coin and love it. It's from the Republic. This is an excellent blog. Well done. Thanks.