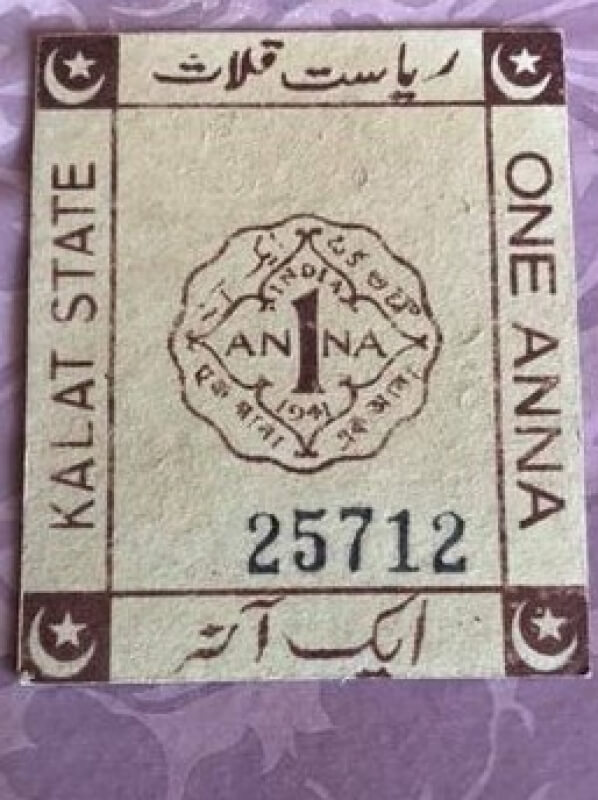 The Khanate of Kalat (Balochi: خانات ءِ قلات‎) was a Baloch Khanate, that existed from 1666 to 1955 in the center of the modern-day province of Balochistan, Pakistan. Prior to that they were subjects of Mughal emperor Akbar. It remained a princely state of Pakistan until 1955, when it was incorporated into the country.

Scarce 1 Anna notecard, issued by the Princely State of Kalat, now in Pakistan.
A proper serial no. issued for each payment token and the paper is a bit thick cardboard type.
Dual used as a payment vehicle in the State of Kalat and also for the revenue/ postal charges.

Very cool! Thanks for sharing this! ; )

That is cool! Thank you for sharing this.

Wow, I've never seen anything like this before. Most countries just decided on more rectangular pieces, but this reminds me of the early continental dollars.

Interesting. Hopefully we hear more from you.

Welcome to our blog spot. Something new for the last day of this year. Thanks.

Very interesting, so much wonderful items in the world of Numismatics.

I'm learning something new every day! Thanks for that!!!

Ditto @ MikeB, I had no idea about this. Thanks for the information!

Very interesting money or notecard from Pakistan. Wonder how many collect that type of currency? Different countries of the world all use different forms of currency, just like languages. Thanks for sharing something new to me.

I knew nothing of money from that part of the world and other countries. Now at least I do know something . Thanks for sharing