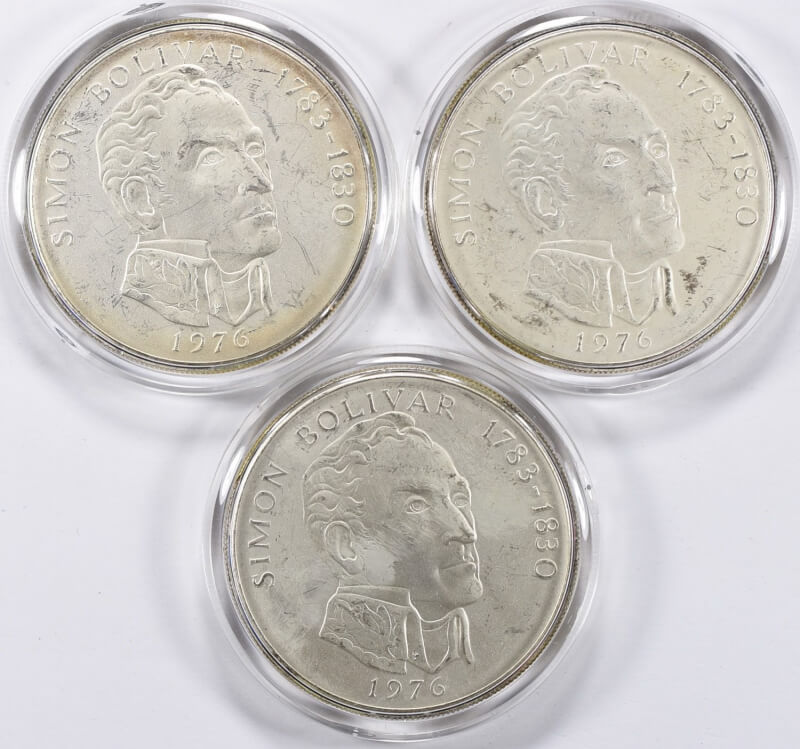 06 Feb 2019
Between 1975 and 1982, Panama decided to coin a series of coins that I call Illustrious Characters type Medal Rotation,
The Illustrious Personages series contains a series of people who contributed enormously in the beginning of the republican life and includes two presidents of our country, Manuel Amador Guerrero, Belisario Porras as well as Vasco Nuñez de Balboa as discoverer of the Southern Ocean today Pacific Ocean.
Within that group Cuproniquel currencies for current circulation were coined, 925 Sterling Silver coins, 500 Sterling Silver coins and a very special matte emission, said coins within that period were made between 1975 and 1976 in denominations since 21/2 cents up to 5 balboas, (I understand that the coins  in Panama has parity with the dollar since the time of separation of Panama from Colombia that was in 1903).
On this occasion we will refer to the very rare coins of 1976 matt finish.
In this group of coins we will see that an unofficial set is assembled which is known as the set of 8 pieces in a cuproniquel version that is composed from a two and a half by Victoriano Lorenzo to the very very scarce coins of Un balboa and Cinco Balboas by Belisario Porras, minted in the no longer existing Flanklin Mint. Note that these coins should not be confused with those made by the Royal Canadian Mint that although they are cuproniquel, they are not mate, and have an error of law. In the case of the coin of 20 Balboas Mate of 1976 many were melted and as they were not presented in special cases like the test many samples minor details.
The coins of 1 and 5 balboas were only minted 125 pieces each and the 20 balboas have only been reported in 2000, but we know that almost all of them were melted so they are extremely scarce.
This series there are very few parts certified in both NGC and PCGS. Not to mention one to two groups.
We hope everyone likes it

Really enjoyed your blog! Learned quite a bit. Nice looking coinage. Thanks for sharing them!

Panama had a lot of nice coins and sets from this era. They are kind of a weakness for me even though I don't collect much from this time frame. Thanks for taking the time to write this.

Really like this blog. Learned a lot today. Thank you.

I thank you for this blog. A lot of history. Those coins are very nice. I always enjoyed the silver balboa, like everyone else. I need to start looking at the other ones. I collect older silver coins from the Americas and have a few from Panama. I can't imagine the US making coins of people that helped our country. The arguing would never end. Thanks again.

Thank you for the information. Learn something new every day.

Nice looking set of coins. Thanks for sharing the information with us. Nice blog.

I picked up allot today thanks to you. History I love and you have plenty of it. I love the coins also. Thanks for your work. I enjoyed it.

Those coins have very attractive luster and finish. 2 1/2 cents is an odd denomination, and Balboas have always had a good design

Just abt the only Panama coins I was familiar with were the "Panama pill" & some large 1 Balboa silver coins. This was good & informative.

Thank you for this insight into Panamanian coinage. I have always found them very attractive and learning about these coins makes me want to look into them even more deeply.