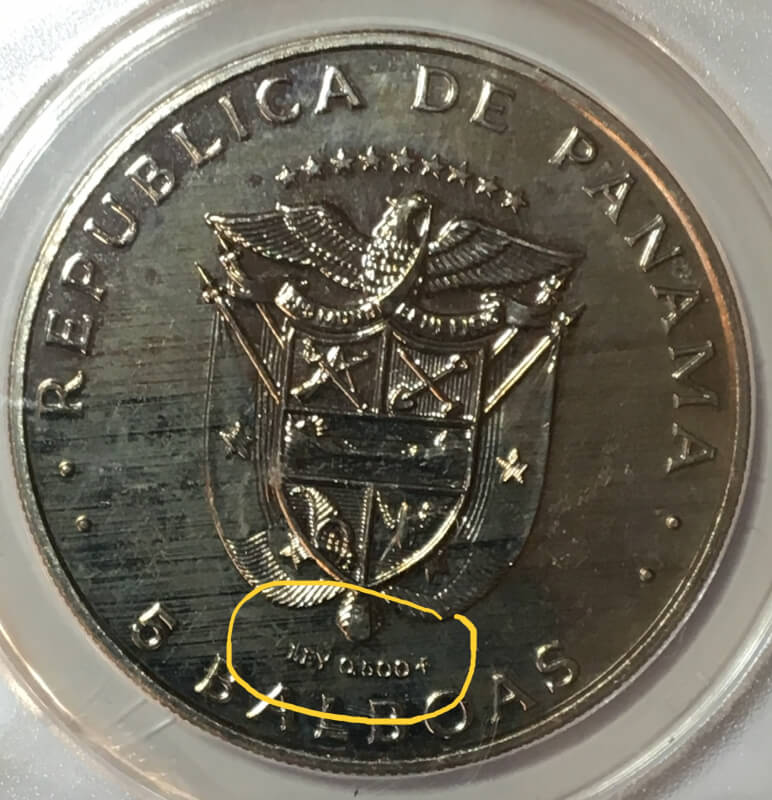 The weekly capsule that on this occasion we have selected the most coveted errors of 1982, in the illustrious personages series, that occurred in Coins of a Balboa CuNi Current Circulation  and of Five Balboas CuNi  Current circulation  & Silver Proof.
The errors in the coins  of current circulation consist in that they were minted by placing the inscription of Ley  500 as if it were a Silver coin. The error in the coin of 5 balboas Silver Proof  if it was different because it is a silver coin ley 500 is placed 925, which did not correspond to any coins  Proof  series Illustrious Characters of the 80s.
The three errors are very rare, being the balboa the rarest one that according to the World Coin there are only 11 pieces (However it is possible that there are a few more pieces), the second weirdest is in the coin of 5 Balboas Proof as this coin was mostly minted to be placed in the set of 8 and 9 pieces made by the Franklin Mint, it is not a piece that looks loose easily, in this case, there is no census or estimate to determine the amount of pieces. This piece is seen in both sets.The coin of 5 balboas Current circulation Belisario Porras, there is a census of 200 pieces and like the others it is quite rare.NGC and PCG register currencies in grades  MS63, for the 1982 coins  of a Balboa as the highest recorded in the case of 5B of Current Circulation MS68, and finally in the 5B of Silver coin they place one in MS69.
We hope the capsule is to everyone's liking

Interesting blog! Thank for sharing these with us!

I guess errors can be found on any world coinage. This was interesting.

Interesting blog! Thanks for the information.

Those are crazy errors. I hope they are yours. I do enjoy seeing your Panama coins. Thanks a lot and great photos. Sources?

I rarely hear about errors from foreign countries, other than the roll of doubled die coins that Pat found. Thanks for writing.

Wow, interesting series of errors, one must assume that the Franklin Mint kept the old dies and through very very lax quality control, allowed those old reverses to be used to mismark the CN coins as silver and the Silver coin as a higher fineness. Very interesting. Thank You for this fascinating blog.

There are many errors overseas. This is a great example. Do you own any? I ordered a two rolls of 1945 Ten Centavos first was great second obverse great the reverse the whole thing was so badly doubled I couldn't believe it. They graded MS 67 were made in Denver !! Well no one can find any I saw one at Heritage sold for an outstanding price. Always check any coin from anywhere these were for the Philippines to help them after the war. So check those foreign coins like those above. Thanks and great shots.

P.S. Did you have any references on the info you shared?

Very well written blog and a very nice coin! Great addition to you collection! Keep those cards and letters coming!