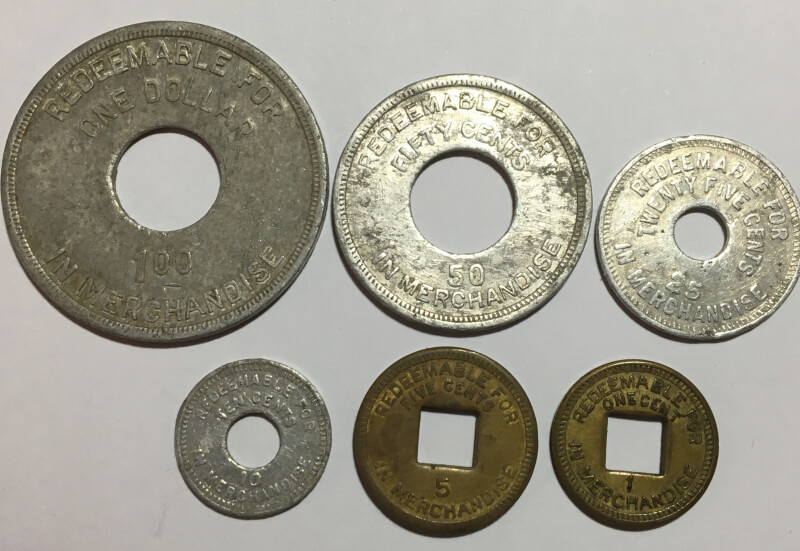 22 Apr 2019
"!Good morning, respected Numismatists and Collectors, we hope everyone had an excellent weekend and we fully trust that the current week will be the best for all of you!"

This time with our usual  capsule, we have wanted to dedicate not to coins but to Fichas or Tokens (as it is known in English) because it is one of the most interesting parts of the Numismatics, for all the history that narrates through a tab. In our country they have very very interesting, rare, expensive and collectible cards. Tokens from the time of union to Colombia.

Let's start our first issue of information Token, which in our opinion is the "Crown Jewel" in our family of Tokens, neither more nor less I present to LOS TOKENS DE PALO SECO that had issues of 1C, 5C, 10C, 25C, 50C and $ 1, are very sought-after token, very difficult to reach today the full collection of this family.

In 1907 the Leprosorio de Palo Seco (Hospital for Lepers) was founded in a financial agreement made by the government of Panama and the US Government, as a group of American doctors discovered 13 lepers in the new city of Panama. The US would charge $ 0.75 for lodging, food and care for the government of Panama. The Leprosarium is built in what is now known as Veracruz. If you want to read more about the history of this place, we forward them to http://www.coins-of-panama.com/paloseco.html?Size=SmallNO

In 1919 it was decided to made Token as a means of payment within the hospital because it was erroneously thought that current money could be transmitting the disease. In 1952 all the Tokens of circulation leave and in 1955 90% of the made pieces are destroyed, nevertheless it is not known how many were destroyed during the time that were used. Today there are very few Token that are obtained and in general those of smaller denomination are acquired (1C and 5C) with greater ease than the rest of the pieces. It is possible that not more than 3 people in Panama can have a complete set.

The most important certifying companies NGC and PCGS, place only 1Cent  as MS and the rest there are only up to Grades AU55. Generally speaking most of the pieces are either bent or have been badly damaged.

We hope that the capsule will please everyone.

I have never seen a token quite like this. Backed by the US too. Thanks for your research and writing. I thoroughly enjoyed this.

Wow! That is amazing. Amazing history and cool coins! I have never heard of these before and now I am fascinated. The holes are cool too.

This blog was so interesting! The tokens are amazing as well as their history! What an accomplishment. Thanks for sharing them with us ; )

Now that is a fantastic blog. I learned a lot from you. Your photos are excellent also. I enjoy collecting tokens and I may have to check out this series. Thanks!

I really liked your blog. learn something new. thanks.

Cool tokens, thanks for the informative and interesting blog

Very interesting blog Thank you. Hmmmm, can you put those square holes into that round hole..... :-) Blessings.....

Tokens are so special, they mark an interesting history of a country or region, not all coins by the amount that are coined, however it is a very complex issue, in my case it is important for me to find a story behind a token Tokens are usually expensive and scarce. This example you post you can see in HA a piece that went 3 or 4 years ago from $ 1.00 to $ 9900. These chips in particular were backed with money from the US government, which makes them more attractive to one because they are really pieces that were used in Panama but are seen as American pieces, in fact in the United States you can find these pieces more easily that in Panama, it will be expensive but there are more possibilities with all the people who, after the reversion of the Panama Canal, stopped being in Panama and emigrated to the US. Attached I sent you the link to confirm the auction in Heritage https://coins.ha.com/itm/panama/world-coins/panama-palo-seco-leper-colony-token-dollar-nd-1919-total-0-/a/3032-25593.s?ic4=ListView-ShortDescription-071515

Thanks Pat, these are the only Tokens backed by the government of the United States of America. The holes made to each token were used so that the leppers, using a thread, because they had deformed hands, could grab them and accumulate them.

That's a.very interesting set of tokens. The ones with the square holes remind me of coins from China. I love tokens and coins I have slowed down allot but if I see one I go for it. Yours paid for Hospitals. The ones I collect saved a country from bankruptcy. So they are important I'm very glad to see these. This is what it's about sharing and learning. Thanks.for your work and the pictures . Each one tells a story. I enjoyed this. Pat