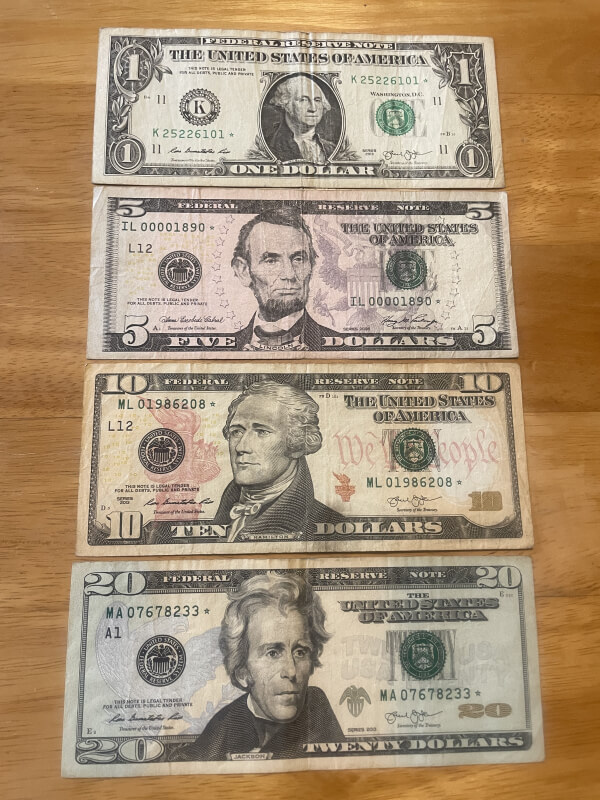 Here's a little something that I found fascinating(†Hopefully you will too.), and many may not be aware of.† The photos provided are a small portion of the Star Notes in my collection.
Let's start with the Series dates.†The series date on a note does not represent the year the note was printed. Instead it signifies the year that a certain design was approved and adopted by the treasury department. The series year is printed twice on older printings of US currency, newer issues have it only once. Determining the actual printing date of a note most often can only be done be referencing the signatures of treasurer, and secretary, as well as the serial number. Very early notes prior to 1869† had no "Series" number. These were only identified by the act which authorized it, such as the act of 1863. The serial number itself uniquely identified each note, except for those issues that exceeded one million bills. At that point, the sequence of serial numbers started over, and the notes were overprinted with a series number. It would then read 1863 series 1, or 1863 series 2 and so on. The highest number used was "Series 187", which appeared on United States notes of 1863 in the $5†denomination. Starting in 1869 the series date appeared on all notes of the same design, and was only changed when there was a major change is the design. The first notes printed by the Federal Reserve was the series of 1914, the second was the series of 1918. All of these were large size notes, also known as "horse blankets". The first series of small sized notes was the series of 1928. In 1950 the word "of" was dropped from the series date. Before 1974 major changes in design were fairly rare. Minor changes were marked by adding a suffix letter to the series date, such as "Series of 1935 A". Some issues of certain designs ran for many years. As an example, $2 United States notes bearing the series date of 1928, were printed into the early 1950's. After 1974 when††William E. Simon†became Secretary of the Treasury, the signature of†a new Secretary of the Treasury was considered a major change.†
Serial Numbers:All US notes are printed with an eight digit numerical number, as well as an alphabetical prefix and suffix. For security and accountability, no two notes of the same type, denomination, or series may have the same serial number. The numbering machines can ONLY print eight digits. Beginning with the serial number A00 000 001A. The suffix letter remains A remains until a total of 25 groups of 99,999,999 notes are numbered, with each group having a different prefix. A note should NEVER be released with eight zeros. Although at least one has been reported.
Star Notes:Star Notes occur when during the inspection process a note is found to be imperfect, whether misprinted, or miscut. When an error is detected, it is removed and replaced with a Star Note. The star notes are exactly the same as regular notes except an independent series of serial numbers is assigned. These are not actually intended to be released with the regular issue counterparts, but only as a necessary. Imperfections in printing are not usually related to the plates themselves. Most often they are related to the misalignment of the plates or equipment, or a number of other various occurrences. Whether it be folds in the sheets, debris in the presses, or an error in overprinting, most are never released. This is why true errors are highly sought by collectors, and can carry a very high premium.
I know that I have left out many details, as I didn‚Äôt intend to write a book, and there is a HUGE amount of information to be discovered pertaining to currency. Hopefully you have learned at least something new. Some of the information presented comes from Wikipedia (not the best source), most was taken from Whitman's 5th edition of United States Currency. A very handy book with a wealth of information on all types of US currency.

Nice information to share. Great feedback on the blog.

Thanks! I love to share when I‚Äôve got the time.

I can't get over the fact that the billions of notes are made in two p!aces. Texas and Washington! Then to ship them to the Federal Reserve banks and then to our local banks. Think of the se purity it must be enormous!! Thanks again!

I personally was unaware of how or why star notes existed. Your blog is very insightful to currency, and how bills are numbered and occasionally starred. Thanks for sharing part of your Star note collection as well.

You‚Äôre welcome! Glad I could help.

That is a nice collection of notes, I still look for star notes but did much better when we were counting cash for girl scout cookies. I do have a rather horrific story to relate regarding my the first star silver certificate I acquired. I would always trouble the bankers when depositing money as to if they happened to have any IKE dollars in the till, and would sometimes be reward with a yes. This one time the answer was no, but I have a unusual note which happened to be a replacement silver certificate. I was quite happy until he started showing concern for how wrinkled it was and tried to smooth it out a bit using the edge of the counter to accomplish the task. You probably just heard the same AAUGH! that Charlie Brown makes as the football is once again pulled away, and I quickly pulled out a dollar to stop the well meaning cashier saving the star note from further scrapping.

Thanks for the comment. That‚Äôs a good story too. I still look for star notes in circulation, but mostly find $1 notes, series 2013. They must have had a pretty rough time with that series, as I see quite a few!

You have a very nice collection of these!

Thanks! I probably have a couple hundred notes. Not all star notes, but quite a few are.

Great collection! Now those are some cool notes. I love those star notes! Thanks for sharing them with us! ; )

I can guarantee at a glance you have a beautiful collection. I love this type of currency, I do have a great colkection of this kind of notes. This is where passion and dedicaci√≥n towards colkecting comes in handy. I know how to match them and how from a certain number you can get lucky and get a starred one. Your acquisition is quite valuable. Take the with goodwill always, that's their prize, Thanks for sharing your items. Great job.

I love your collection of silver certificate and red seal Star notes!

Very good blog. Nice star collection. I also check every note I get for stars. My coin dealer saves Star notes to give out as change. Kind of s test to see if his customers are paying attention. Thanks.

Thanks! Like I said, that‚Äôs a small portion. I have way more than that. Most are not worth much though. I just think there cool.

Great blog I enjoyed it. Now those are notes that people collect. I wish they were in a little better condition. But I would keep those. I have star notes from the one dollar to the 100.00 dollar bill. I like collecting them. And there is allot of information on these. Thanks for a good blog. Try and stay away from Wikipedia. They have some wrong information!! Thanks again

Yeah, the newer ones were in circulation. Since I discovered star notes, I check every note that I get. The $20 isn‚Äôt too bad.