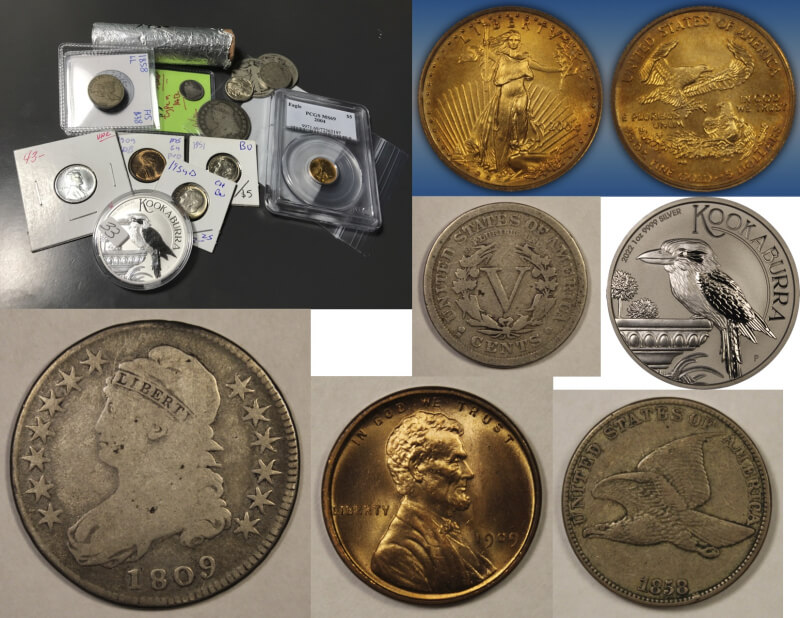 It's been a bit since I last posted a blog, and that is in part because I've been pretty busy with work and other things, and partly because I haven't had much to share recently, but today, I have some really cool stuff to talk about, so let's begin!

Okay, so several blogs ago (I believe) I mentioned that I was planning on going to a coin show near me that was happening in a couple of months, well that show was last weekend and I was able to go the first day of the show (Friday)!

I only had around two hours to look around, so I tried to see as much as I could (I made sure walked past and at least glanced at every single of the estimated over 100 tables) and also (of course) purchase some coins.

So, well before the show I had decided that I was going to search for and purchase the most affordable PCGS graded 1/10th ounce gold eagle I could find at the show, and I did just that! I was able to grab a beautiful 2004 example with nice toning and an older slab for just $215!

Oh, and I almost forgot, I also grabbed a nice Australian Kookaburra for $33

As you can probably tell, I had a lot of fun, and I saw some pretty cool coins (including a really cool MS64ish [I don't remember exactly] double struck Indian Head cent and a coin the size of a dinner plate!).

I hope this blog encourages you to find out if there are any coin shows near you and attend one (if you haven't already), seriously, they're awesome! I could have spent days looking through all of the binders, albums, boxs, of coins and the hundreds (probably even thousands) of slabbed coins.

Anyways, thanks for reading my blog, enjoy the pics (if I can get them to upload for once), go to a coin show(!), and have a great day!

That is super awesome! I always wanted a gold coin for my collection. That VDB cent and Kookaburra silver coin are very nice! Thanks.

The first day is the best day to buy, because nobody has gone through and stolen all the great deals. Although if you're OK with not many options, the last day might be better because dealers who are just trying to sell a little more stock before the show ends will usually give you a large discount.

I hadn't thought about that, but it sounds like it could work pretty well. It would actually be kind of nice because there wouldn't be soooo many coins that I HAVE to look at and not get a chance to.

Nice coins! That 1909 VDB looks like its in really good condition!

Possibly a grading candidate... ...thanks.

You did very well on that GAE, about where the market would be with the premium. I've seen them going a bit more on a few auction sites and the value will only rise from there. So this is why I like coin shows. Right time, right place.

Ya, the funny thing is that after I purchased it I saw another one (exactly the same) at a a different table for $248 and I saw a 2005 BU Unc. for $300, so this one was definitely the best deal.

Nice haul! I especially like the toning on the 1/10 oz gold American Eagle. You have a nice variety of coins. I also liked the 1909 VDB Lincoln cent. Good job talking down the Lincoln cent and getting the Liberty Head nickel to boot!

Nice blog! I'm so glad that you a great time! It's amazing trying to look around at everything! Sounds like you picked up some really nice coins for your collection! ; )

I was able to get your photos to load by hitting download. Great looking coins. Nicely toned gold!

Glad you figured it out! I really wish I could just upload them like normal...

Nicely done. It's very hard to see everything. Well done having a plan and a budget and stickling to it. Not an easy thing to do at a show. I'm happy for you that you went to a show. We all should experience that. I hope you met some interesting people as well. Great place to make contacts. Good job talking down a coin to a lower price. That is part of the coin show experience. Thanks. P.S. I'm having trouble getting your photos to load. I'll try later.

Awesome! Glad you got to a show. This is exactly how I felt last month, after my first show. Sounds like you picked up some nice coins. That 1/10th oz. gold Eagle will keep you going back for more. Lol. The older coins are always nice as well, especially that 1909 VDB.

You did very well for your first coin show. I bet you really enjoyed it. Thanks for telling us about it. Since I can't go I felt like I was ther. Thanks allot take care of those beauties! And gold does tone. Not 24 karat but that with copper in it. It looks great!