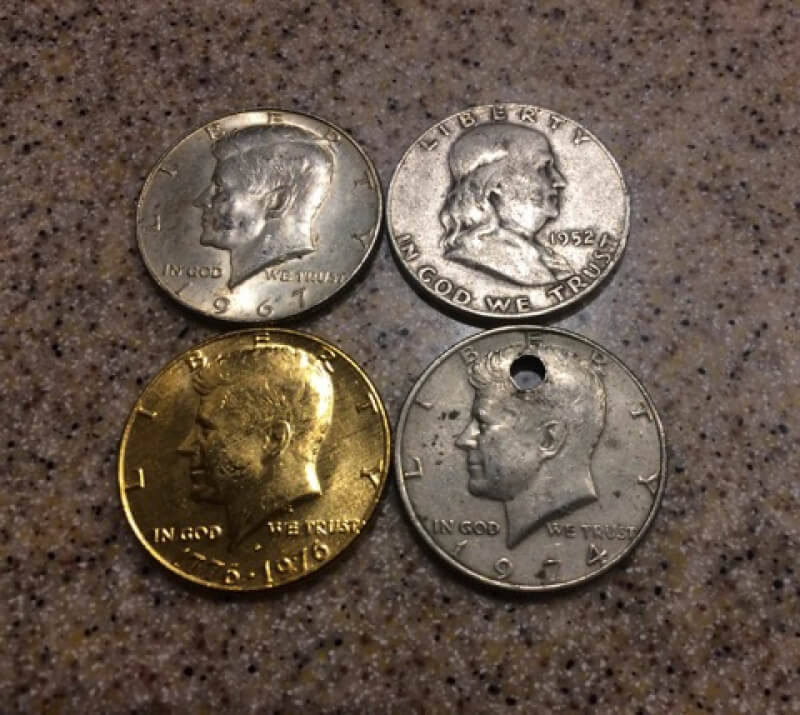 Hi guys! Yesterday I hunted my first half dollar box and got some great finds! First and for-most I found a 1952-D Benjamin Franklin! I also found a 1967 40%er, a gold-plated bicentennial, holed 1974, a 2018-D NIFC (The first year they renewed the cameo and it looks great!), a 2019-P (also with renewed cameo, but it has "The Ring of Death"), and some other NIFCs including: two 2002-Ds a 2003 2004 2009 2012. Now all I have to do is hunt the nickel box and FOUR penny boxes I ordered along with it, I am planning to hunt one every day this week and keeping you guys updated on any more awesome finds! I already have found almost as much silver as I did the entire year 2020! (mainly because of "Covid") Well, that wraps it up for now (pun intended), thanks for reading my blog and happy hunting!

Good work man! It sounds like it was a very successful hunt! Cant wait to hear about the next one! Cya 'round!

Nice finds! The gold plated half is highly unusual, but it is a bicentennial. I'm excited to hear what comes from the other boxes!

Wow, you have already had some fun and more to come. Best of luck with the rest of your rolls.

WOW, what a haul! I can never find half dollar boxes in my area, but everyone who hunts these seems to find some silver.

You have to order them at a bank to get them, you can't find them.

That is cool! yesterday i also hunted some boxes and I got a big handful of wheat pennies! one of them was from the 40's and it was still red and in AMAZING condition!

Neat, mon. Where did you order this. I would like to know.

I ordered them from my bank!

Wow!! I can't even order half bucks from my bank. Awesome finds. Ain't it cool when you find something? Are you looking for varieties? That is where I spend most of my roll hunting time. Good luck. I'm jealous.

Yep, I looked for errors/varieties but found nothing.

Sounds like a good box. I would have fun spending the coins.

That is awesome. Amazing you can still find a silver half dollar. Thanks for the update. Enjoy seeing what find are out there. We have a member of out coin club that worked at the local casino here in PA. He did a presentation on his finds from working the cash window. It blew our minds what he had. All kinds of silver and some older paper notes. A dream job for finding coins in circulation.

That is nice. With covid limiting change in circulation, getting rid of them probably won't be a problem, or you can just deposit them back into your account. Good work and nice blog! Later!

Great finds, keep at it!

Now the problem is getting rid of them lol :^)

That's allot of quarters. Wow much did it weigh? Some good finds. Keep a sharp eye. Sometimes these things can be small. Be careful you don't miss anything. I wish you luck on your poject. If you do more keep us updated. Congratulations on the funds you made!!

Just to be clear, it is a HALF DOLLAR box, and it weighed a lot, it was heavier than a quarter box probably. Thanks!