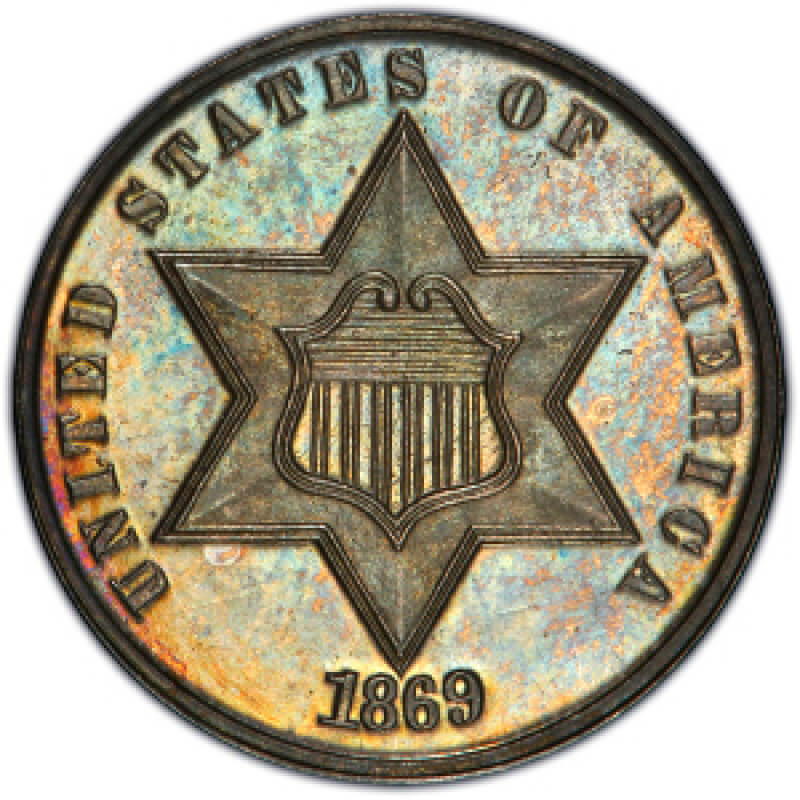 Hi guys! Today my blog is going to be about Three Cent Silvers, so here we go. The United States Three Cent is an unusual denomination that first appeared in 1851, although, as with many other coin designs, pattern coins for the denomination were produced in 1849 and 1850. The original purpose of the Three Cents coins was to provide an intermediate denomination between the Cent and Half Dime, making it easier to change some of the odd foreign coins that were legal tender in America at that time. In 1851, postal rates were dropped from five to three cents. While three Large Cents could have been used to purchase a postage stamp, the bulky copper coins were expensive to produce. Thus, a coin of three cents value had two purposes, enough to get the denomination started in 1851.The first Three Cents were made of a low-grade silver. These tiny coins were known officially as "Trimes" and unofficially as "fish scales." They were the first circulating U.S. coin without a depiction of Miss Liberty in some form or another. In 1854, the percentage of silver in the coins was increased to 90%, to match that of the other silver coins in production at the time. Three sub-types exist of the silver Three Cents. Type 1, issued from 1851 to 1853, shows the obverse star with a single outline. After 1853, the weight of the Three Cents coin was reduced. To indicate this change, two extra outlines were added to the star, resulting in the Type 2 version that lasted until 1858. In 1859, one of the extra outlines was dropped, creating the third and final sub-type, the Type 3 version. Thanks for reading my blog! And see ya next time!Source-PCGS CoinFacts, and photo was courtesy of PCGS

Great blog! Never knew much about trimes, other than seeing them in my Whitman book. Surprising to know that at one point in time, US sliver coins had less than 90% in them! (Excluding war nickels, of course :) . Quite a strange nickname, "fish scales". Again, thanks for the informative blog! Sincerley, CoinsInHK

All of Longacre's designs are pretty solid

The one bad thing about the Silver Trimes is their poor state of preservation due an extremely tiny and thin planchet, most of them seem to be dented or bent in some way. Its hard to find one under XF condition that is not so damaged.

Three cent pieces seemed very small. I don't have any of them in my coin accumulation. Just never got interested in collecting them. Thanks for a very nice three cent blog.

I never like the design . That's just me. Many do. I guess it would be nice to try me out a type.Set or the whole set. Thanks for the blog.

Who knows how many of these trimes were dropped and never found again. I have trouble locating small cents when I drop them.

Thank you so much! I have been very very curious about thrimes, and have been searching desperately for one within my budget. Thanks for more info! Cheers, NM

I've always liked the design of this coin. appreciate the blog.

Nice blog. Thanks. I enjoyed the read.

You are more than welcome.

Do you guys know what category you are supposed to use under "Published An Article" to request YN dollars for posting a blog? Is it "Your Newsletter or exchange blog" or are you supposed to do it under "Other"?Thanks for any help! And again, thanks for reading my blog!