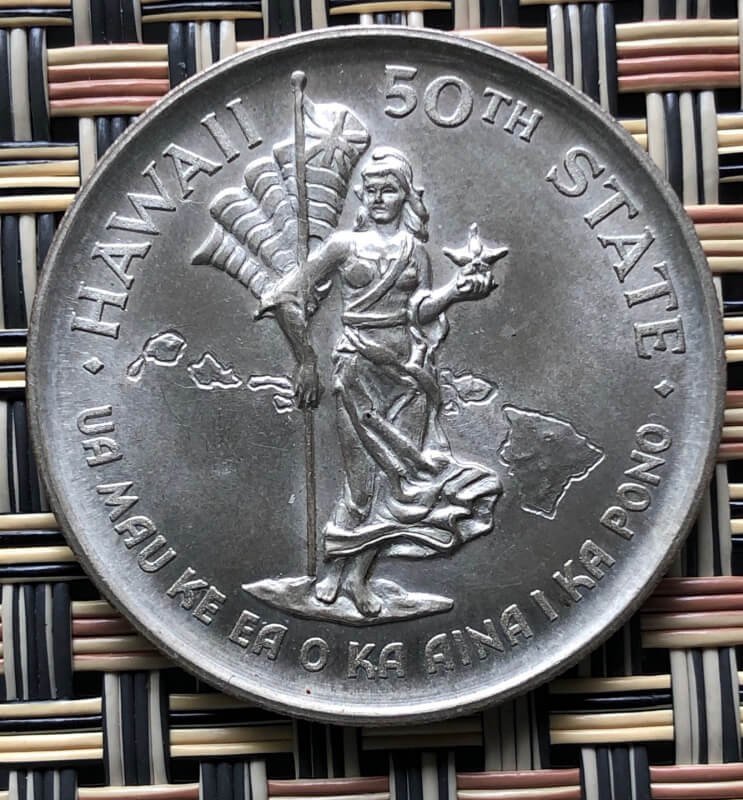 One of the best things about being an ANA member is the opportunity to share knowledge with each other.  There is not a day that goes by that I do not learn something new and do not find a new collecting niche that piques my interest.

As some of you may recall, I recently wrote about a book called "Hawaiian Money..." and the items it inspired me to purchase.  Gary, one of our most skilled bloggers, PMed me shortly thereafter with an offer to purchase an extra Hawaii Statehood Heraldic Art Medal.  Gary sent pictures of the medal but I also looked in my trusty reference book and found the medal listed with two different version, a Thin version and a Thick version.  But in reading about this Statehood medal, I found out about a whole series of medals that I was not aware existed.  So here's the Cliff Notes version of the Heraldic Art Medal series.

The brains behind this series of 60 different medals was a gentleman from Cleveland, Ohio named Robert McNamara, he produced these medals from 1959 through 1978, 3 per year, with a maximum mintage of 6000 per issue.  His idea was to make the commemoratives that the Mint would have made if they had continued to make commemoratives after the Washington/Carver Half Dollars series ended in 1954.  Some of his many medals included Alaska Statehood, Centennial of the Civil War, and San Diego Bicentennial.  They are all extremely well executed and certainly worthy of any collector interest.

My Hawaii Statehood medal turned out to be the more common Thin variety, it's weight was about 192 grains vice the 256 grains required to be the thick version.  My medal fits perfectly in a half dollar sized folder and is the kernel of a new collection I am contemplating.  I would like to obtain the Alaska Statehood and St. Lawrence Seaway examples to round out the 1959 issues.

In closing, I would urge all of you to check out this remarkable series of medals, you are sure to find one or two that will gladden your collector's heart and maybe even send you down a brand new collecting journey.

PS- I owned two copies of the San Diego Bicentennial medal at one time. One of them I gave to a friend visiting me in San Diego many years ago, the other I disposed of sometime in the past.  I never knew they were part of such an impressive series.

Perfect for a collector looking to make a short set. Very nice medallic art. Thanks.

Those are some nice looking medals Mokester ! Are they legal tender? Just wondering.

As a Commemorative fanatic, I've always liked these. They bridge the gap nicely between the Classic and Modern series. I've always felt they overdid the Expo and World Fair issues, but then again people attended them back in the day.

Nice medal and blog. It is great when a book can open your eyes to another area to collect or study.

The first paragraph sums it up. Excellent specimen from which to build around.

We have a member of our local club that has collected the whole set. He did an educational program on them several years ago. Up to that point I had never heard of them either.

And the cool thing is that you could put together the set for a relatively reasonable cost as their are no great rarities in the 60 (he does have some Gold issues, etc), it would take some time and a couple thousand bucks but definitely doable to have an extremely attractive grouping. Mr. McNamara was truly talented, every one I have seen has an attractive design.

Amazing that Robert McNamara produced 60 medals over the years. Definately will research him and theae medals. Will definately get more into medals when shows hopefully start back up. I have been saying about getting into medals, but without realizing it I already have over the years. Have a few coin club medals, and other various medals picked up at flea markets for a dollar or two. Certainly nothing like the McNamara medals, or some others posted, but medals.

I have wnever heard of them either. And now a xouple of thousad bucks is going toward he rent. And food . I guess its what makes.the world.go round. It looks.interisting. Thanks i learnrd today . Thats important.. Thanks

Your rite everyday before i sign of i try to makensure i picked something up. Thats the idea. And i do. You must have a beautiful collection. Those are just a few coins. . Doesnt matter what the represnt to you and your friends we know. We buy them for different reasons they mean something to all of us but mostky to you. Thanks for sharing

Fantastic medal Nice pick-up from a fellow member. That is the best part. I learned from you today. I even went to the site on your label. It's there but dang if I can figure out what it is for. Thanks.

Somehow I feel responsible for your latest numismatic foray. I guess I'm contributing to the delinquency of a numismatist :) That said, I'm glad you are happy with your Hawaii medal! I also own the St. Lawrence Seaway medal and it is one of my favorites! https://coins.www.collectors-society.com/wcm/coinview.aspx?sc=368505

LOL, sometimes I feel like I am your coin collecting stalker but REALLY, we just seem to have somewhat convergent paths. (:

What a cool Medal! Nice addition to your on-going collection! ; )

Wow nice blog. I will say something... whenever i get on the ANA, I learn something new.