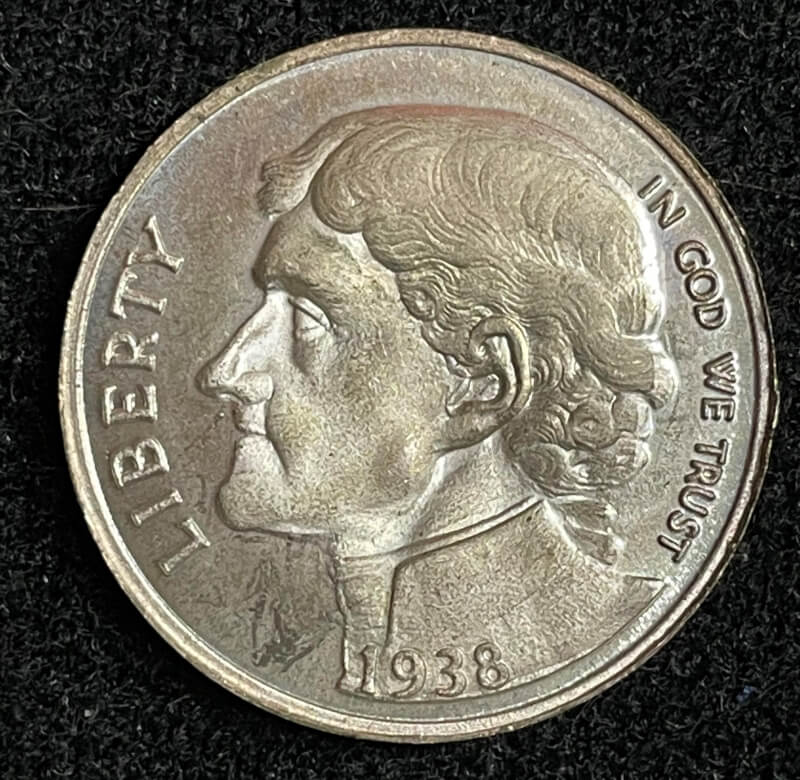 It‚Äôs always fun to research an unusual coin.† I had been preparing the auction lots for the May 2023 PAN show when I came across a ?nickel? in a 2X2 flip labeled ‚Äú1938 Jefferson Prototype‚ÄĚ.†† Hmm, I checked both sides, did not see the word COPY, I checked my pattern book and did not find it pictured so I started hitting the internet and found an example selling on EBAY for an incredible $999.99.† Could it be?† Had the KidZone found a coin that could finance our operations for the next few years?† I could not believe it so I looked for SOLD examples of this 1938 Jefferson prototype and found none.††

So with further research I found this so-called prototype may have been the result of an open competition sponsored by the Treasury for our new nickel in 1938.† Apparently almost 400 artists submitted ideas for the new nickel and the plaster models for this particular nickel were actually sold by Stack‚Äôs in 1994.† Although the plasters were unsigned, they were attributed to a Dutch engraver named Karel Hejda.† They were bought by a European dealer who had the plasters reduced and turned into dies that were used to strike 1998 †pure silver examples in the year 1998.†† A 60th anniversary† tribute for a designer that was not selected by the Treasury.†

You wonder what possible market these would have and you also wonder how anyone believes they will get $999.99 for an example.† My only thought, they are hoping the coins is an actual US Mint Pattern or some similar thing.† In any event, a fun bit of research and a silver medal probably worth its silver value.

How would NGC do research to verify? Not sure how grading agencies work.

Never knew that. Super interesting blog & coin. Don‚Äôt know about $1000, but certainly has some numismatic interest. Thanks Mokie!

I really love that coin, especially the reverse, but then, I am, after all, a Virginian

Wow .. I didn't know such a coin existed! This is very interesting.

The things we find, and the history that goes along with it. Definitely makes for an interesting history lesson.

I love research. This one paid off. Good job. Still should fetch some good money. Great blog.

Interesting. The only pattern I've seen bears a three dimensional view of Monticello with a large tree reverse. Can't recall the obverse bust design, or where I've seen it. Not the 1993 Jefferson Commemorative but similar. It also doesn't appear in my Judd book. Thanks for sharing!

Nice blog. I always enjoy reading about nickels, since they wee the first series I collected.

Interesting find ! So a dealer made these in 1998? Wonder how many. You never know what a donation might bring.