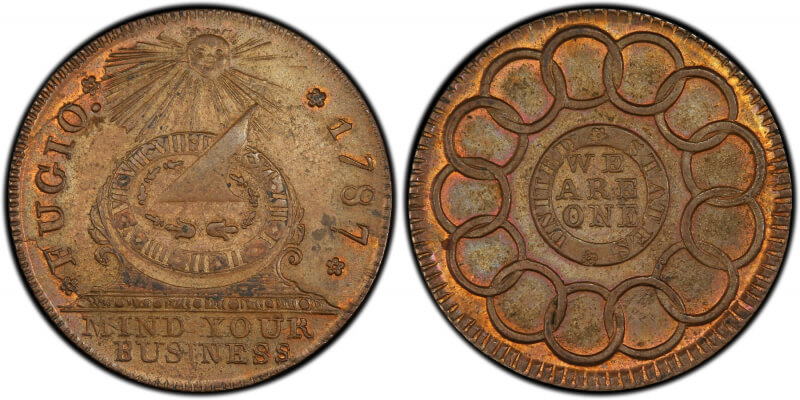 Hello everyone! This is my first blog on ANA, so I hope you enjoy!

I will start with pre-Revolutionary war, so the coins I will be talking about aren't the modern US denominations.

The Massachusetts "New England" coinage were the earliest coins minted in the colonies, and even though these coins were minted in 1652, they had no date. The colonialists minted the Threepence, Sixpence, and the Shilling (twelvepence) of this design. Before they minted these, English coins were so rare that the colonists often used corn, pelts, bullets, and even used foreign silver and gold coins for buying goods. The simplicity of this design and the fact that planchets were often not perfectly round made it simple to clip the coins, and counterfeit. (Note: some people would scrape, or clip the rim of coins made out of precious metals, and collect the shavings to make a profit, this is called clipping). So, they changed the design to the Willow Tree Coinage (1653-1660), Oak Tree Coinage (1660-1667), and later, the Pine Tree Coinage (1667-1682). (Note: these coins are only for Massachusetts; there were other coins for different colonies).

Due to lack of copper coins, the colonists cut silver coins into smaller sections for lower face values.

These are post-Revolutionary war coins.

Although the "New England" coinage was the first minted in the colonies, Fugio Coppers were the first coin issued under US authority in 1787. Each one was worth one cent when they were made. Then, in 1792, they made a proposed coinage with a silver center cent, birch cent, half disme, and disme. The next year, the mints made large cents and half cents. Other face values were developed over the next few years.

At this time tokens were made, too many to list in this blog.

I hope you enjoyed this article, as much as I had when researching, and making it. Until next time, over and out.

I really enjoyed your blog! Welcome and have fun here. Lots of great people and information!

Thank you! I think I'll have a lot of fun here!

nice blog loved reading it. hope to see more from you in the future.

Hello and Welcome. Fantastic blog. Now we will all be expecting miracles from you. haha. Very well done. These are some exciting, high priced coins to own. Great photos as well. How about a bibliography is my only hint. Thanks.

Thank you! They are sort of expensive :)

Great informative blog! First off... Welcome to this ste! I hope you find your stay enlightening and enjoyable. I loved your blog. Colonials are starting to interest me more than ever, but as a 16 year old, my sparse budget doesnt allow me to collect these. Maybe in the coming years. I hope to hear from you again soon! Cheers, NM

Thank you! I actually don't have any colonial coins in my collection either.

Still looking for the right one of these to add to my collection. These are great. The new england pieces could have a little more detail lol. Thanks!

that was a really nice blog for the first one! I really enjoyed it.

Thank you! I'm glad you enjoyed!

Very interesting topic. Great work on a blog. Really enjoyed the topic. I have a Fugio myself. One of my favorite coins in my collection.

Thank you! I'm glad you enjoyed my blog. It would be cool to have a Fugio :)

Glad you are here, very nice survey of pre revolutionary issues! You write well. Follow your followers back and you will make lifetime friends here.

Thank you for the advice, and reading this blog!

Thank you for a great first blog. I have never been in to Colonials, always seemed kind of intimidating and even a little expensive. Please keep on writing, we always like to see an infusion of new thoughts and ideas.

Thank you! Most of them are very expensive... I don't actually have one although, I wouldn't mind getting one ;)

Welcome.. to the ANA. I like pre colonies coins . I like them all . Especially the Fugio. Thanks for a good blog. I enjoyed it.

Thank you! I find nearly all coins interesting :). I'm glad you enjoyed my post!

Welcome and thank you for the blog. Let us know if you have any questions and please continue to post, we love hearing from others. Well done and Welcome again. Later!

Thank you very much, I will keep that in mind, every one here is very nice!

Welcome to the ANA! It is amazing how much the mints and circulating coins have changed over the years. I think that I read somewhere that the earliest forms of money was simple seashells. Thanks for the blog, let us know if you need help with anything!