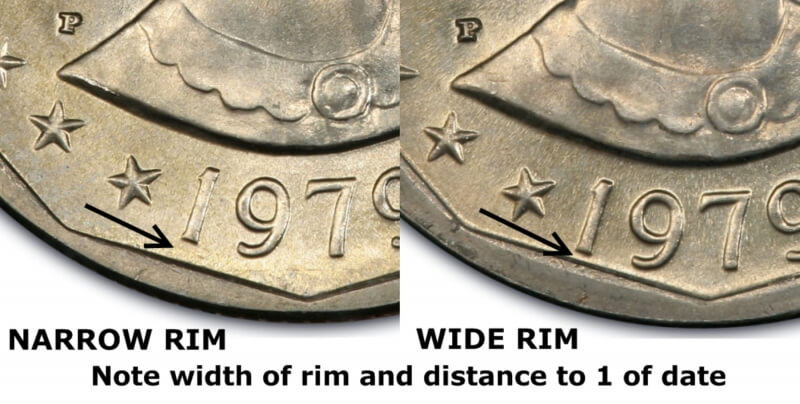 05 Dec 2017
In the numismatic field there are numerous great and wondrous coins but then there are those that just dont even come close and make you question who thought it would be a good idea. if you haven't guessed it yet i am talking about the Susan B Anthony Dollar (SBA). this was the mints attempt on making a modern silver dollar and they made it a few millimeters larger than a quarter so as not to be confused (which it was confused and still is confused as one). also they were going to have the coin (like many Canadian coins) have a octagonal edge (maybe more flat sides) but instead of placing this characteristic on it they just made a design into the coin that made it look like it should have sides but still round (see pic).
beside for that this is probably the cheapest set out there that you can get every coin in the series in MS (possibly including varieties) do to its 4 year mintage: 1979, 1980, 1981, 1999 *(PDS). the reason i decided to write the short informative blog was because i actually received one in change instead of a quarter and didn't realize until today that i had one in my wallet because they look so similar.  this is a big reason why they switched to the gold color of the new dollar so there is little confusion.

I am working on completing my SBA collection.

Ii remember there was a big issue with placing Anthony on the coin. Designer Frank Gasparro originally designed a beautiful Liberty Cap design, which collectors loved. I hate to say it, but the design played a part in the publics rejection. Then again, no one liked the Franklin half Dollars at first also.

We have so many millions of unwanted SBA dollars that the US mint made a deal with Ecuador. They were happy to take them. They use the US dollar as their currency and have no problem with dollar coins. Saved a ton on not having to mint their own. Thanks!!

Your right they didn't go over big at all. I blame the designers those who approve them and the mint that makes them. It was a great idea but wasn't thought through. What a waste of coinage. Thanks for the blog good work. Mike.

Glad to see some interest being given to a much-criticized coin.

Yeah... I agree. They are quite awful sorry to say. I have a Dansco Silver Dollar Album that I'm working on and unfortunately the Susan B. Anthony is included in this collection.

There is not much to get a collector excited about this series. But is variety is one.