English Mints during the Civil Wars

Two mints existed in the Kingdom of England at the beginning of the English Civil Wars – the Tower Mint in London and the Mint at Aberystwyth in Wales (located near the Welsh silver mines). In 1642 (the first year of the war), the king set up additional mints at York, Shrewsbury, Oxford and Truro to produce the coinage necessary to pay his ­armies. Other mints were established as needed in Exeter, Bristol and Chester, as well as emergency mints during sieges of major towns and castles. Parliament was able to produce enough coinage for its needs at the Tower Mint in London. Interestingly, Parliamentary coins of the Civil War period continued to use the same designs as Royal coinage, since Parliament claimed to be loyal to the king – it just disagreed with his policies.

English Engravers of the Civil Wars

Thomas Simon (1618-65) – Simon was an English engraver who began working at the Tower Mint in 1635 as an apprentice. During his apprenticeship, he was exposed to mill machinery through the work of Nicholas Briot – a lesson he would take to heart in his later endeavors. During the Civil Wars, Simon remained with the Tower Mint and declared his allegiance to Parliament through the creation of a copy of the Great Seal (required for the creation of official documents) – an act that was considered to be high treason against the king, and that would later haunt him after the restoration of the monarchy in 1660. Simon was quickly recognized for the quality of his work and became a chief engraver in 1645. Under the Common­wealth, he began to work closely with Peter Blondeau, producing a series of dies for use with his machinery. Simon’s work came to the attention of Oliver Cromwell in 1653, and, through Cromwell’s patronage, Simon became the sole chief engraver of the mint. Simon’s close connection to Cromwell did not help him after the Restoration, and he lost his position to Thomas Rawlins. Despite this, he continued to work at the mint as an engraver until shortly before his death.

Nicholas Briot (c. 1579-c. 1646) – Nicholas Briot was a French engraver, medalist and inventor of minting machinery. He held the post of engraver-general at the Paris mint (1606-25), but, in 1625, he moved to Britain where he became the principal die engraver at the Royal Mint and master of the mint in Edinburgh (1635-9). Briot elected to stay at the Tower Mint during the Civil Wars, but secretly worked for Charles I and was responsible for much of the king’s wartime coinage. Briot’s experiments with mechanized coin production were met with great hostility by English mint workers, who strongly resented any change from traditional coining methods, as well as having to work with a foreigner. Nonetheless, Briot’s coinage was of a much higher quality than earlier issues. Briot was successful in replacing hammered coinage in Scotland, but not in England.

Peter Blondeau – Peter (Pierre) Blondeau, a well-known French medalist, was responsible for the final conversion of English coin production from traditional hammered technology to a mechanized process under Charles II. He was invited to London in 1649 to demonstrate his new mechanized coining process. Unfortunately, the English moneyers guild succeeded in blocking his efforts, claiming that coining using the traditional (hand-hammered) method was not only cheaper, but faster than Blondeau’s machinery. In 1651 the Commonwealth invited Blondeau to produce trials for the new coinage. It was not until Oliver Cromwell, as Lord Protector, ordered the minting of coins bearing his portrait (from designs by Thomas Simon) that Blondeau’s machines were grudgingly accepted at the mint. The resulting experimental coins were outstanding for their quality and regularity. In 1657, Blondeau was commissioned to produce a full series of Cromwell’s portrait coins, which was abruptly halted in 1658 upon Cromwell’s death. Blondeau then went back to France. Soon after the Restoration he returned to England, and, in 1662, was appointed engineer to the mint in charge of converting the Royal Mint into a fully mechanized facility.

Thomas Rawlins (c. 1620-70) – Thomas Rawlins was an apprentice goldsmith and gem-engraver in London before beginning work at the Royal Mint under Nicholas Briot. At the beginning of the English Civil Wars, the king established a mint at Oxford, and Rawlins, who supported Charles, was appointed engraver of seals, stamps and medals. Rawlins was responsible for the 1644 “Rawlins Oxford Crown,” which showed King Charles I riding across the hills overlooking the city of Oxford. He subsequently was appointed chief engraver. During the Civil War he was responsible for the production of many medals, most notably the Gold Shrewsbury Medal commissioned on January 23, 1643 and the “Peace or War” medal in July 1643, and the Corona­tion Medal for Charles II. Rawlins was also a part-time playwright. The Rebellion was his only play to be performed during his lifetime. It is not known when his two other plays – Tom Essence and The Modish Wife – were published, though both were performed in the late 1670s.

John Roettiers (1631-1703) and Joseph Roettiers (1635-1703) – John Roettiers was the oldest son of Philip Roettiers, an Antwerp goldsmith. Trained as a stonecutter and medalist, his earliest known productions are dated 1658 and 1660. In 1661 Charles II of England invited John and his brother Joseph to join the British Royal Mint. John produced many important medals throughout the reign of Charles II, and was later appointed the the Mint’s chief engraver. He became famous for his work during three reigns – Charles II, James II and William and Mary. He was considered one of the best engravers ever to work at the Royal Mint and was responsible for prestigious projects, such as the new Great Seal of Charles I (1666-67), as well as the coronation medals for James II and William and Mary. 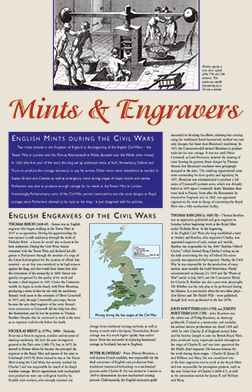 Minting during the late stages of the
Civil War 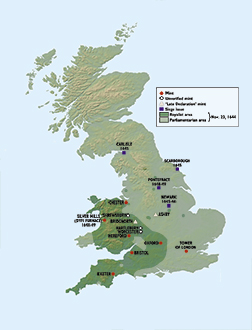