The early modern period saw the development of the first true “world” coinages — coins that were used across the globe, not just in the areas where they were produced. Some ancient and medieval coins, such as the Athenian “owls” or Venetian ducats, had a similar status but only within defined regional limits.

Due to European exploration in the late 15th century through the 19th century, the world began to be integrated into a single “global” trade network for the first time. Explorers, empire-builders and merchants all searched for currencies that would simplify economic transactions. Spain was ideally situated to provide the world’s first global coinage due to its possession of the incredibly rich silver mines of Peru, Bolivia and Mexico.

Ferdinand and Isabella of Spain introduced the “Spanish dollar” or “real de a ocho” (8 real coin) as part of their monetary reforms of 1497. From the middle of the 16th century, when the system of mines and transportation was fully established, production of Spanish silver coins in all denominations sky-rocketed to meet the demands of Spain’s vast empire and costly wars. Spanish silver coins became the most common coinage in the world until the mid-1800s.

The competition for world dominance in gold coinage was tighter — in part because no one power controlled the majority of productive mines. Spanish, Portuguese, Dutch and English gold coins all competed on the world market. Eventually, England’s dominance of world trade resulted in the English gold sovereign becoming the gold coin of choice in international trade by the early 19th century.

The earliest 8 real coins, known as “cobs” were very rough in appearance. The nickname comes from “cabo de barra” (end of the bar in Spanish) — the blanks for the coins were literally cut from the end of a cast silver bar that had been hammered into a round(ish) shape. 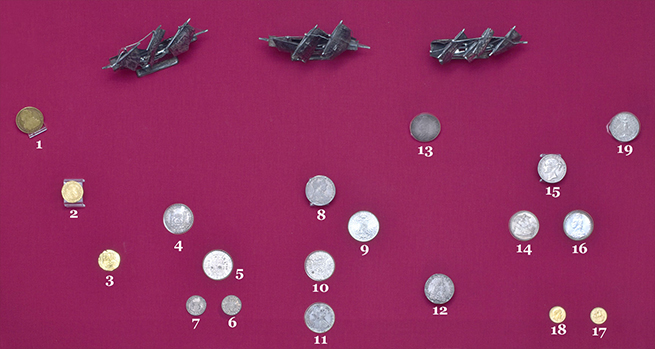