Bills of exchange were developed by European banks during the 14th and 15th century as trade increased and it became impractical to use coinage for all transactions due to the large amounts involved. Security in transportation, availability of coins and sheer bulk all contributed to the development of bills of exchange as a convenient and secure substitute for coins. The bills were written by one bank to another in a different location as promises to pay a specified amount of money to a specific person in a specified period of time.

The bank note — paper money as we use it today — was invented in the 17th century. The first Europeans to use bank notes were the Swedes, who developed paper money as a substitute for their unwieldy copper plate money (the largest denominations weighed up to 50 pounds!). The Swedish Stockholms Banco issued Europe’s first circulating banknotes in 1661. These bank notes were issued with fixed denominations without date limits and for use in general circulation. Despite the failure of this first experiment in 1664, paper money became increasingly common over the course of the 18th century in European countries and their colonies.

By the middle of the 19th century, paper currency was widely accepted throughout the world. Eventually, the problem of how to back notes successfully without over-issuing them was solved by making notes generally acceptable by the government in the payment of any debts, and by backing through the use of gold or silver reserves to secure the monetary system.

In 1696 the Bank of Scotland became the first commercial bank to successfully issue paper currency. Three hundred years later, it still does, making its banknotes the longest continuous issue in the world! 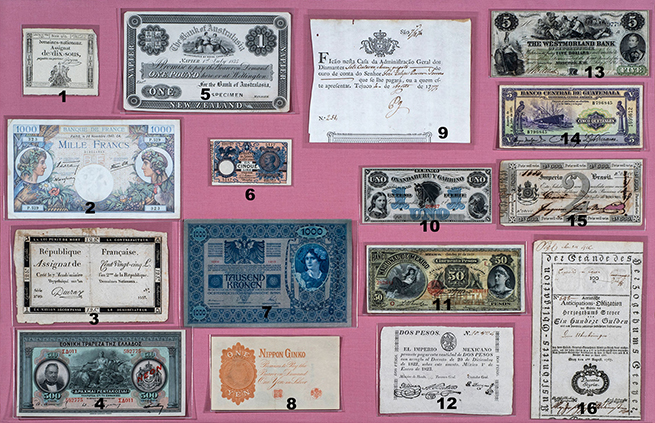