The greatest change in our modern concept of money has been the move away from the idea that money should have an intrinsic value — a silver dollar was worth a dollar because of the amount of silver it contained. Today most money is “fiat money” — the value is determined by the printed denomination and has nothing to do with the value of the metal of which it is made.

Today, our currency has value because the government accepts it in payment and because we are confident that the government will continue to do so. This change occurred as a result of the economic devastation and instability caused by World War I. All of the combatant nations suspended gold specie payments and attempts to reinstate the system after the war were finally killed by the advent of the Great Depression. The United States kept the gold standard until 1971, when economic pressures from the Vietnam War, the gas crisis and decreasing gold reserves forced the government to abandon it.

Modern paper money has also changed in appearance. Toward the end of the 19th century, new printing and engraving processes allowed for the introduction of more intricate and colorful designs — all with the primary purpose of counterfeit-prevention. A happy by-product of this process is that paper money in general has become more colorful and interesting as countries experiment with new designs for their currency.

Another change is that, increasingly, paper money is no longer made out of paper! Beginning with Australia in 1988, an increasing number of countries are using a polymer plastic to produce their “paper” currency. When combined with color shifting inks, magnetic threads and other innovations, paper currency has drastically changed its appearance over the last 40 years. 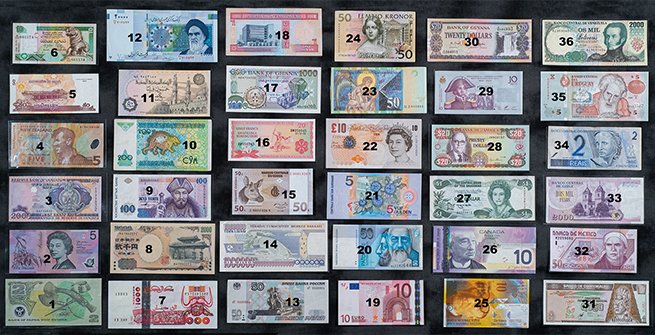