October 29, 1929 saw the most devastating stock market crash in the history of the United States, which extended to the rest of the economy, starting with the banking sector. Its consequences continued to plague the industrialized world until the eve of World War II. For Franklin Delano Roosevelt the depression was an opportunity — he came to the presidency on a platform of reform designed to pick the nation up out of its economic woes. A key element of his program was the “bank holiday,” a concept that had been discussed during President Hoover’s administration as the crisis worsened and customers withdrew their savings in gold or cash (over 5,000 banks closed during 1930-32).

The “bank holiday” of March 1933 was a plan to shut all banks down in order to allow the financial panic of the times to subside. It allowed the Federal government to ensure there was enough currency available for those banks that were in good financial condition (which were quickly reopened), and to reorganize those banks that were not.

The bank holiday resulted in a mass issue of merchant and municipal scrip, especially in smaller towns and rural areas where banks were closed for a longer period. The volume and types of “Depression era” scrip distinguishes this period from any other era in American numismatic history. The materials used for the scrip was unusual and reminiscent of the 1920s and ’30s notgeld of Germany and Austria — paper, metal, fish skin, clam shells, cardboard, plywood and even rubber. As time went on the variety of materials and number of scrip issues grew as businesses realized that they could make money by selling their notes. 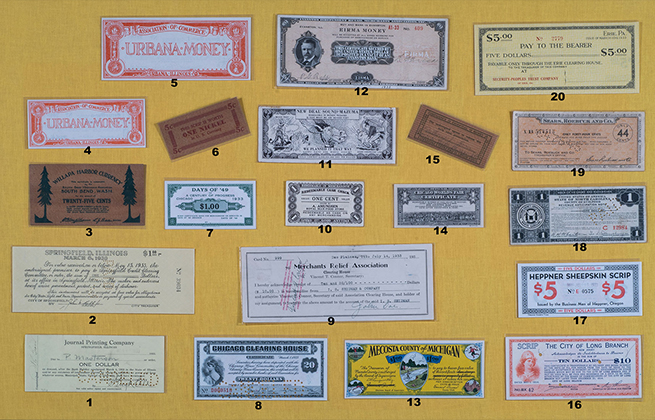