In 1630, transactions in the Massachusetts Bay Colony were conducted through barter. In Maryland, Virginia and Delaware tobacco was the primary medium of exchange. None of the colonies were allowed to produce their own coinage — and imports of silver or gold coins were strictly limited. A wide variety of copper coins were imported for use in the colonies and counterfeits were common.

The Massachusetts Bay Colony established a mint in Boston in 1652, and produced the first coins in the English mainland colonies of North America. The coins were 20 percent lighter than their English equivalents to keep them circulating only in the colony. However, coins were in such short supply that Massachusetts coinage was soon used throughout the English colonies of North America and the Caribbean. There were four types issued, starting with the “NE” (New England) series and followed by three tree designs — the Willow, the Oak, and most famously, the Pine tree. Massachusetts coins were dated 1652, the authorization date, until 1682, when Royal authorities shut down the mint.

The Catholic Lord Baltimore (George Calvert), who had resigned his seat as British Secretary of State, founded Maryland. He was granted the colony in the form of a charter that gave him extraordinary power, including the right to strike coins. Because of its relative religious tolerance and laws allowing Catholics to hold government positions, Maryland became a haven for displaced English Catholics. Cecil Calvert, the son of George Calvert, had coins struck for Maryland in 1659 to alleviate the colonies’ shortage and to make a profit. The coins were probably struck at the Tower of London Mint. Lord Baltimore coins were minted in silver in denominations of four, six and twelve pence. The obverse of the coins featured the bust of Lord Calvert, while the reverse displayed the family coat of arms and the denomination. 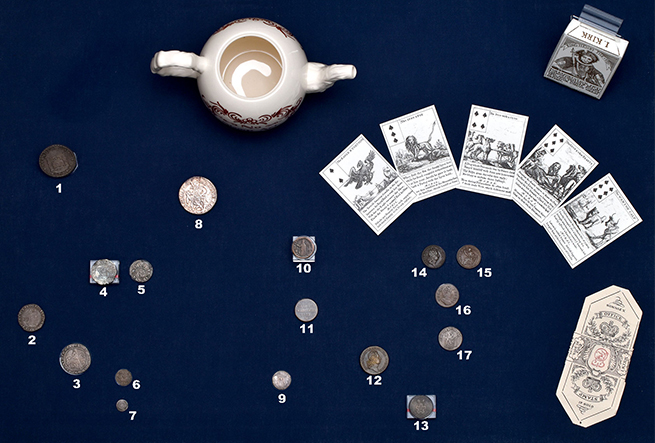