Financing the Revolution was a major challenge for the Continental Congress. This governing body was new and untried; it had to earn the trust of the people. Its powers came slowly — and only with the consent of each colonial legislature.

The Continental Congress’ first attempt at coinage was the 1776 Continental dollar, which was designed to announce the existence of the new nation and alleviate the shortage of coinage in the embattled colonies. Unfortunately with few reserves of silver, the Continental dollar did not make it beyond the trial stage. The Continental Congress and the States were forced to rely on paper currency and private copper coinage to meet the needs of the new nation. Coinage became so scarce that many resorted to barter, using Indian corn “commodity money.” Clearly there was a need for a more user-friendly medium of exchange.

With the Revolution’s end in 1783, the United States began to think about a new monetary system. Unfortunately the war had left the country in deep debt, making progress difficult. In the meantime, private mints such as Machin’s Mills produced counterfeits of British halfpennies that were widely circulated despite their ugliness.

The Articles of Confederation allowed each state to issue its own coinage as long as it conformed to standards established by the central government. Many states produced coins during this period, as did some private individuals. The era of state coinages ended in 1789 with ratification of the Constitution, which granted the federal government the exclusive right to produce coinage and provided for the establishment of the United States Mint.

Massachusetts coinage was the first worldwide to bear the new denomination of a “cent.” 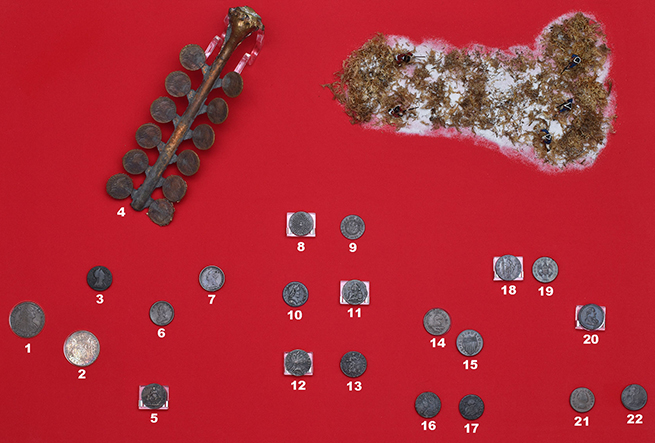