With the foundation of the United States Mint in 1792, a national American coinage began to appear. The introduction of the new coinage was gradual as the Mint struggled with Congress to acquire the necessary funds to hire employees and purchase buildings, equipment and bullion. By 1796, the full range of denominations authorized by the Constitution had been struck, but mechanical issues and shortages of bullion restricted the issue of coins, making it impossible for the Mint to produce enough coinage to meet the needs of the country. As a result, foreign coinage continued to circulate alongside American coins as legal tender for many years.

This problem was made worse by the bi-metallic standard used to back the coinage. The early U.S. dollar was backed by silver and gold at a ratio established by Congress — when the actual value of the metals relative to each other changed, the result was the export of the more valuable coin to be melted down. Thus, silver dollars, which had been overvalued relative to Spanish 8 real coins, became scarce — to the point where the Mint ceased producing them in1804. This happened to gold coins as well after 1803.

The problem was not solved until the 1830s, when Congress changed the composition of U.S. coins, making them less susceptible to melting due to the changing market price of bullion. By 1857, increased production at the Mint, modifications in the composition of U.S. coins and discoveries of new sources of gold and silver made it possible for Congress to demonetize foreign coinage. For the first time, American coins were the only legal tender coinage in the U.S.!

The first regular-issue U.S. coins were the “Fugio” cents authorized by  Congress in 1787 and produced at the New Haven mint under contract with James Jarvis. Jarvis was  unable to deliver the specified number of coins. The ensuing  scandal paved the way for the establishment of the U.S. Mint in 1792. 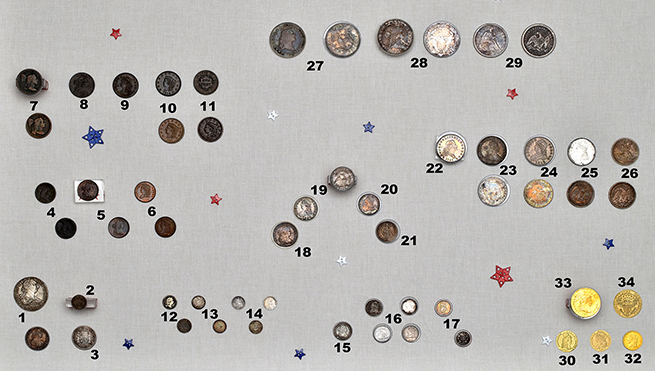