In 1905, President Theodore Roosevelt asked renowned American sculptor Augustus Saint-Gaudens to design new coins for the United States that would reflect the glory of the greatest nation on earth. The result was a great re-design of U.S. coins over the next 20 years by noted American artists who created some of the most beautiful coins ever produced for circulation. Saint-Gaudens produced the most beautiful coin ever minted in the United States: a $20 gold coin bearing the image of Liberty holding a torch and striding forward — “a living thing and typical of progress.”

By 1937, a new mood was beginning to sweep the country heavily influenced by the Great Depression, and new designs began to replace the coins of the “American Renaissance.” Starting with the Washington quarter in 1932 on the 200th anniversary of his birth, U.S. coins began to adopt a more historically based look, focused on famous figures of the past. Thomas Jefferson was introduced on the nickel in 1938, Franklin Roosevelt on the dime in 1946, Benjamin Franklin on the half dollar in 1948 and Dwight D. Eisenhower on the dollar in 1971.

In the meantime, the old series of gold coinage came to an end in 1934 as gold was demonetized in order to protect U.S. gold reserves during the height of the Great Depression. The last issues of the quarter eagle and half eagle were in 1929 with the eagle and double eagle discontinued in 1933, ending a long and interesting period of American coinage.

The Washington quarter was originally intended as a one-year commemorative issue. Ironically Washington’s popularity ensured that the design would be kept, despite the fact that Washington refused to have his portrait used on early American coins! 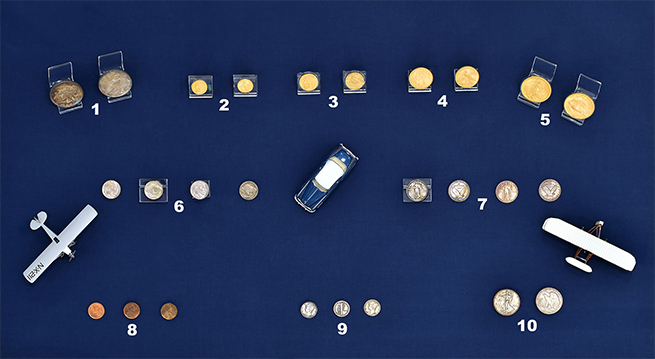