In 1964, U.S. coinage began a major change — it was converted from a bullion-based to a purely “fiduciary” coinage where the value of the coins was determined by the denomination struck onto it, not the value of its silver content. After 1964, the only regular-issue American coins to retain any silver were half dollars at 40 percent silver. Even that was discontinued in 1971. The change was due to the rising price of silver.

Otherwise, with the exception of the change of the reverse of the cent from the wheat ears to the Lincoln memorial (1959), the introduction of the Kennedy half dollar (1964), the Eisenhower dollar (1971) and the unpopular Susan B. Anthony dollar (1979), there was little change in U.S. coinage for almost 40 years. The Bicentennial of the United States in 1976 inspired a series of designs for the quarter, half dollar and dollar.

The Mint gained permission from Congress during the 1990s to introduce changes to U.S. coinage, beginning in 1998 with the introduction of the popular Statehood Quarters series. Since that time, commemorative versions of several other circulating denominations, including the cent (Life of Lincoln series and the new shield reverse) and nickel (Westward Journey series and the change in Jefferson’s portrait), have been introduced, creating a rich variation in new designs (and some confusion), and a resurgence in collector interest in contemporary American coins.

The least notable addition to U.S. coinage has been the new small sized “golden” dollar beginning with the Sacagawea dollar (2000-2008), followed by the Presidential dollar series in 2007 and the Native American dollar in 2009. Despite many efforts to boost the circulation of dollar coins, they continue to be unpopular with the American public except, perhaps, as collector’s items.

The San Francisco Mint still issues silver proof versions of U.S. coins. These are available to the public only in silver proof sets though some silver quarters may be found in circulation after being “broken” out of a set. 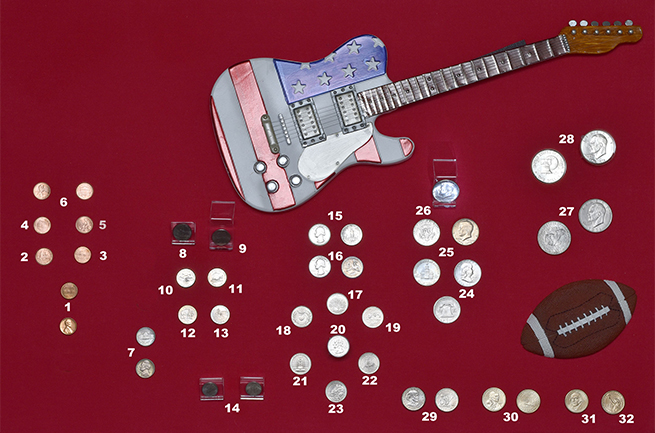