Before the Civil War, American money came in two forms: coinage (“hard cash”) produced by the Federal government, and privately issued paper money (“obsolete notes”). Privately issued paper currency was the backbone of the domestic economy, but had major problems, especially with counterfeiting. With the start of the war, Federal authorities realized that a new paper money system was needed.

The new notes became known as “greenbacks” from the green ink used in printing the backs. The series started with “Demand” notes of 1861 produced in $5, $10 and $20 denominations payable in coin on demand from the U.S. Treasury. In 1862, “Legal Tender” notes were issued in $1 through $10,000 denominations. The value of the notes was based on faith in the government, and that they could be used to purchase government bonds that paid interest in gold, making it lucrative for investors to buy bonds with depreciated greenbacks at face value. Interest-bearing notes were also issued from 1861 through 1865 to help finance the war.

Although Demand notes were no longer printed after 1862, they are still valid today, redeemable at face value. The U.S. Treasury began redeeming Legal Tender notes for coin in 1879, but they continued to be issued until 1966 and are still redeemable today at face value. 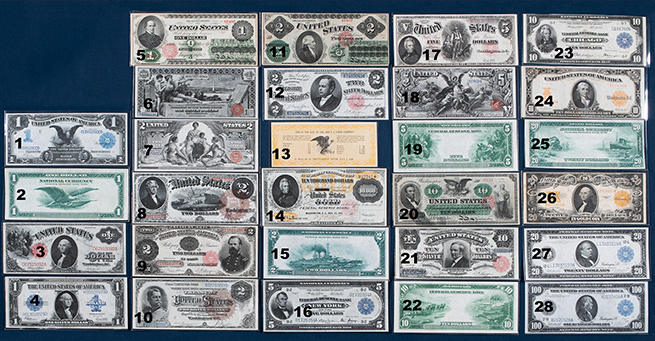