Indian coins first appeared in the northwestern portions of the subcontinent in the provinces controlled by the Persian Empire. These small silver ingots are known as “punch-marked” coins, or “karshapana.” They were produced with designs punched onto one side, rather than between a set of dies on both sides. These coins have been found from Afghanistan into southern India and were in use for centuries; an interesting is that they seem to have been issued by individual merchants and bankers, not a government.

The conquests of Alexander the Great left Greek and Macedonian settlers and cities scattered throughout much of southwestern Asia. After Alexander’s death, his empire split into a number of smaller kingdoms, one of the most powerful which was Bactria. Bactria was formed in what is now Afghanistan and became a powerful focus of Hellenism in the region for more than three centuries. During the 3rd century B.C., the Bactrian Greeks took control of much of the northeast of India, establishing several independent kingdoms that issued coinage which combined Greek and Indian artistic styles and had the first bilingual inscriptions that appeared on money. Later Indian coinage was produced by multiple kingdoms throughout the subcontinent, each with its own characteristics. 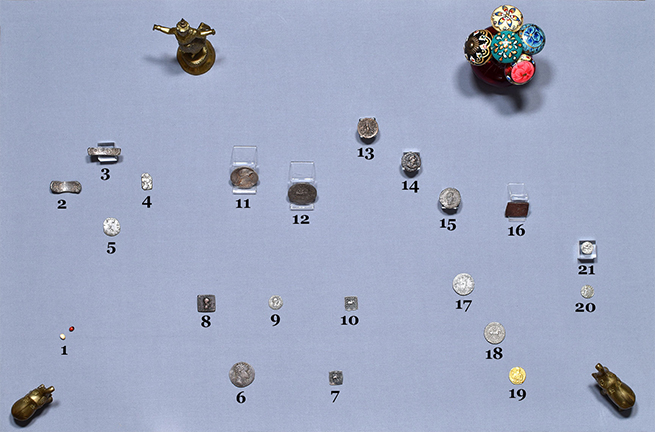