Sub-Saharan Africa is one of the last regions of the world where traditional money was still being used into the second half of the 20th century. African traditional money ranges from numerous forms of iron and bronze objects to cloth, cowrie shells, salt, cattle and ivory. Unlike most traditional money from other regions, much more is known about how African types were used and how they were valued since many of them were used into recent times.

The diversity of metal objects used as money, especially iron, reflects the importance of metal-working for trade, tools and weapons across the continent. Iron and copper were used as money in the shape of spears, knives, rings, ingots and wire. Some of the more exotic examples include Katanga crosses, throwing knives and kissi pennies.

Many other natural resources were used as well, ranging from cowrie shells and cattle to elephant tail bracelets and salt. Some items were used locally and had value based upon difficulty to collect or produce; others were used as currency in long distance trade.  Most had dual uses either as a form of money or as jewelry, spice or food. In most areas modern coinage and paper currency have replaced traditional forms but, interestingly, traditional money is often depicted on the modern currency, providing a sense of economic continuity and stability to its users.

Quartz stone was used during pre-colonial times in Togo and parts of Ghana. A hole was drilled in the middle of the quartz to identify the stones as money. Quartz was also ground up as part of a potion that was reputed to have healing properties.

In Zaire, a U-shaped copper piece called a Boloko was used as traditional money up to the 1950s. Ten Bolokos purchased a wife. In 1950, 1 Boloko was worth 50 Belgian francs. 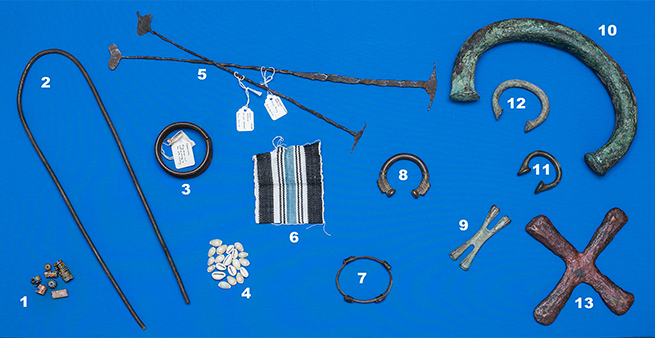