Traditional money in North America ranged from the cacao beans and copper hoe money used by the Aztecs of Mexico and the flint disk and shell items used by the Hopewell and Mississippian cultures to the wampum beads and furs of the north eastern shores of the United States and Canada.  Many items were used as a form of money in trade before the Europeans arrived, including copper nuggets, bone fishhooks and flint for making tools.

After the arrival of Europeans, trade patterns began to change. Iron tools and utensils along with trade beads became an important part of exchange and the European desire for furs created new standards of value. Native American trade in North America was based on trapping and hunting furs.  All types of fur-bearing animals were hunted — including beaver (the most important), ermine, muskrat, otter, bear, mink and lynx, among others. Some were used in the European colonies for clothing, but most were shipped to Europe for use in hats, coats, and liners.

Various items became important in colonial trade as a form of money, particularly wampum and beaver pelts, which the Indians traded for European goods like muskets, knives, axes and kettles. In colonial shops, and even on tax receipts, the value of items often was expressed in terms of native money, illustrating the importance of Native American trade and the scarcity of coinage.  Indians especially wanted metal items, such as muskets, knifes, axes and kettles, that made their lives easier. 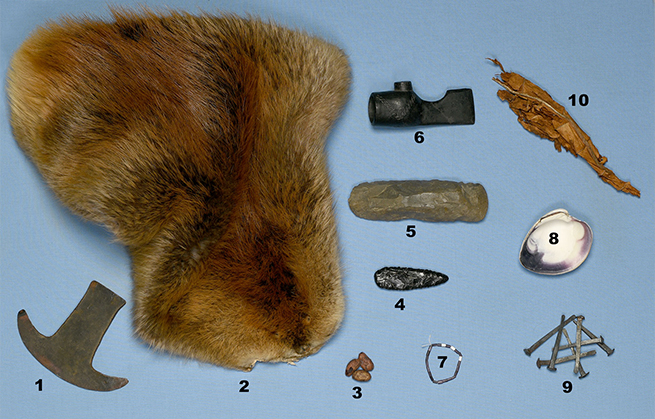