The Holy Land is located between two of the oldest cradles of civilization – Egypt and Mesopotamia – and is the site of some of the world’s oldest cities. It also forms the border between Asia and Africa and has been the crossroad of migrations and invasions for millennia, leaving a rich legacy of diverse cultures, tribes and kingdoms. As the home of the ancient kingdoms of Judea and Israel, the Holy Land is the site of the holiest places of Judaism, Christianity and Islam.

Coins have played an important role in the area since at least the 4th century BC, when they were first struck in the region while it was under Persian control. They are mentioned in the Old Testament and reflect the teachings and imagery of Judaism. These coins feature religious objects and plants in keeping with the Second Commandment’s prohibition of graven images – this was in stark contrast to the gods, kings and animals portrayed on the coins of their neighbors.

Coins of the Bible

Money is often mentioned in the New Testament, especially in relation to events in the life of Jesus Christ. It can be identified with local coins of the time, from Judean and Imperial Roman coins to the coinage of the two revolts that resulted in the Jewish Diaspora (exile). The spread of Christianity throughout the Empire was facilitated by the Diaspora, setting the stage for its eventual adoption as the official religion by Constantine the Great. Before that time, Christians endured many hardships and martyrdoms, starting with Nero’s claim that the fires that destroyed much of Rome in AD 64 were caused by dissident Christians. 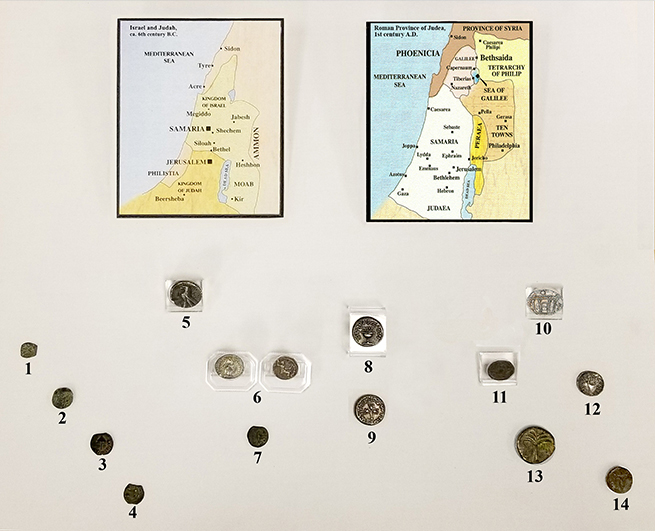