Abraham Lincoln (1809-65) was the 16th President of the United States and successfully led his countrymen through the dark days of the Civil War. He preserved the Union, abolished slavery and strengthened the Federal government during the greatest crisis in our nation’s history. A major element in the medallic legacy of Lincoln is his role as the “Great Emancipator.” This role is often intertwined with the concept of Lincoln the martyr created due to his tragic assassination at the end of the war, before he could realize his plans to reunite the divided nation and oversee the implementation of emancipation in the South.

Medals reflect many aspects of Lincoln’s history and legacy. His assassination ended plans for a peaceful and equitable reconstruction of the South, which instead endured a prolonged occupation as an enemy territory. For the newly emancipated slaves, their new and hard-won rights as equals under the law were eroded after their former masters regained control of the political machinery of the southern states, leaving the hopes and dreams engendered by Lincoln’s Emancipation Proclamation only partially fulfilled. Lincoln became a martyr to all those who supported his ideals of a strong and unified American government with liberty, justice and equality for all, and his image has been used ever since to represent a whole range of virtues on medals of all types: honesty, strength, wisdom and benevolence. 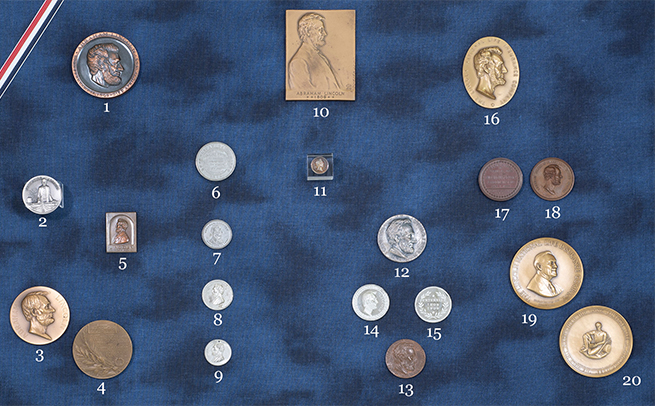