Abraham Lincoln is seen as the man most responsible for saving the United States from dissolution during the American Civil War. He was catapulted onto the national scene as he led the United States through the bloodiest war in our history and the greatest challenge to the Constitution. He managed to preserve the Union, abolish slavery and strengthen the Federal government at great personal cost.

At the end of the war, Lincoln planned to reincorporate the defeated Confederate states into the Union through a peace plan encouraging Southerners to lay down their arms and work together with Northerners to reunify and rebuild the nation. The spirit that guided him was spelled out in his Second Inaugural Address, now inscribed on one wall of the Lincoln Memorial in Washington, D. C.: "With malice toward none; with charity for all; with firmness in the right, as God gives us to see the right, let us strive on to finish the work we are in; to bind up the nation's wounds.... "

In life, Lincoln wanted to project an image of himself as a man of the people, hard-working, down-to-earth and approachable to the average American, his most loyal supporters. Campaign tokens and early medals show Lincoln as a simple man, in stark contrast with the sophisticated politician revealed in his writing and speeches. Lincoln’s tokens include such homilies as “The rail splitter of the West” or quotations from his stump speeches, making for great insights into the public image he projected. This image of a homespun man of the people was effective during his time and has remains a part of how we view Lincoln today. This is lost in later medallic portraits in which he appears as a mythic hero-figure. 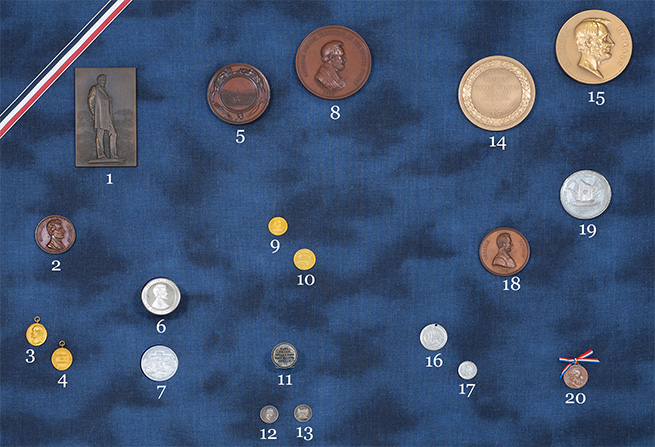