As George Washington began his tenure as first president of the United States, he faced multiple challenges in establishing how the new nation would be run. An urgent challenge was developing a policy for relations with the American Indian nations, most of whom were allies of Great Britain. Washington and Secretary of War Henry Knox, responsible for Indian Affairs, agreed that peaceful relations with our closest neighbors was an absolute priority.

Silver medals were necessary for negotiations with American Indian leaders, who attached great importance to them as tangible symbols of power and friendship. Native American leaders insisted on receiving American medals in exchange for British, Spanish or French medals as a sign of their new alliance, in keeping with long established tradition. The Washington Indian Peace medals were presented with great ceremony as diplomatic gifts between the United States and the American Indian nations. Three sizes were available, depending on the recipient’s importance, and were accompanied by certificates describing the rights and respect due to them.

The first American Indian Peace medals consisted of an engraved silver oval plate with welded rim and loop. They were hand-engraved by skilled silversmiths, as the new nation had no mints capable of striking medals of the necessary size and quality, a problem that persisted even after the establishment of the U.S. Mint in 1792. The imagery on the medals was symbolically important – President Washington was depicted interacting as an equal with an Indian chief, with a “civilized” farming scene in the background. Hundreds were issued with the dates 1792, 1793 and 1795 for use by the government in diplomatic negotiations with the Indian nations. These impressive pieces were highly prized by their recipients, who wore them on ceremonial occasions and portraits and often passed them on to relatives as family heirlooms. They are extremely rare today with only a few dozen originals medals known. 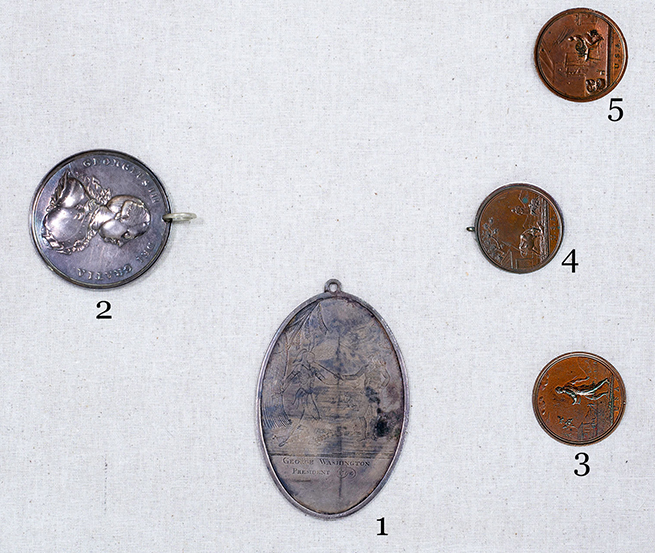