Among the many medals struck by the U.S. Mint are those produced to honor individuals ranging from Mint directors and superintendents to famous Americans honored by Congress. The first were issued in honor of directors Robert Patterson (1835-51) and James Ross Snowden (1853-61). Starting with H.R. Linderman, a regular series was produced to honor directors and superintendents of the Mint. They followed in the 1890 by medals for secretaries of the treasury. These medals were originally presented by the Mint employees - often when the individual left office. By the 1870s they were available to the public in 3-inch bronze versions.

The Mint has also produced series of medals celebrating individuals, events or acts of heroism based on requests by government agencies and, as today, through Congressional resolutions. An important part of the series was the group of Lifesaving medals first issued by the State Department in the 1850s and subsequently through the Treasury Department in the 1870s to honor those who risked their lives to save victims of disasters at sea.

A little-known series of medals was also produced to commemorate the U.S. Assay Commission, founded in 1792 to ensure that silver and gold coinage met the standards specified by Congress and oversee the honesty of Mint officials. The Commission consisted of government officials and members of the public appointed each year by the President from 1797 to 1977. Starting in 1860, medals were issued for the commissioners as a memento of their service. All Assay medals are rare and were struck annually after 1866 until 1977. 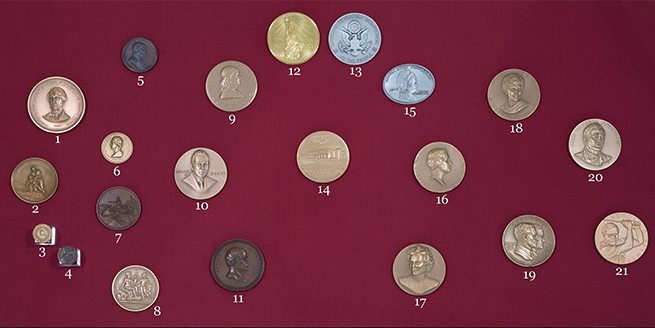