Established in 1928, the Society of Medalists (SOM) is the United States’ most prolific art medal society, issuing 139 medals between 1930 and 1995. The list of those commissioned to design the medals is a who's who of exceptional 20th-century medallic artists, including Laura Gardin Fraser, Paul Manship, Hermon A. MacNeil, John Flanagan, Anthony de Francisci, Robert I. Aitken and Adolph Weinman.

The SOM was founded by Clyde Curlee Trees, owner of the Medallic Art Company (MACO), and George Dupont Pratt. The society viewed itself as the successor to the Circle of Friends of the Medallion (1908-1915), one of the first attempts to promote art medals in the U.S. MACO produced all of the 134 regular issue medals (generally two were released per year, with five special issues in 1977), all in bronze except for two World War II issues made in silver. Anniversary issues and restrikes were also produced.

Advances in minting technology enabled the SOM to pursue its mission of producing high quality, affordable medals for the public. The founders recruited a committee of accomplished sculptors who solicited medal designs. Artists were usually provided a popular topic for their design proposals and the committee voted to select a winning design, which was then produced. Originally, only American sculptors were solicited and prior winners were ineligible for new medals. In later years, previous winners and international sculptors were invited to compete. Due to rising costs and decreased collector interest, the series ended in 1995.

Only four artists designed more than one medal, ensuring that a wide range of styles and subject matter were presented. Medal #1, Laura Gardin Fraser's Hunter, “Ruffed Goose,” was featured in the August 1930 The Numismatist, along with information about the new society. Mintage numbers ranged from 3,200 for medal #1 to 600-800 for later issues. The ANA's collection of SOM medals is thanks in large part to substantial donations by the Medallic Art Company and legendary numismatist John J. Ford. 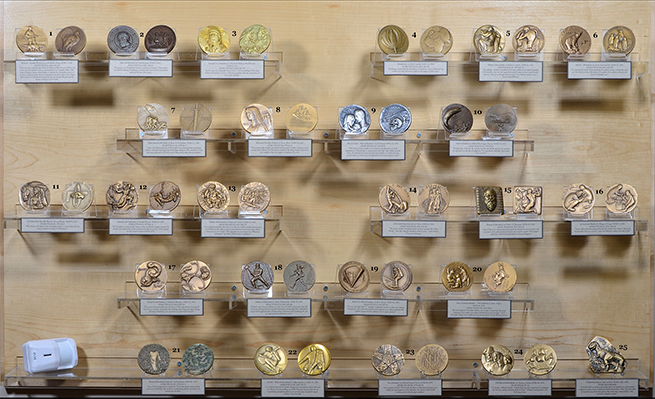