Early badges and medals evoke an emotional response and illustrate the horror and inhumanity of slavery. A minority of white southern families owned slaves, but many others leased them from their owners. Urban areas issued copper slave badges, required to be worn as proof that taxes had been paid on the lease and as identification. Charleston, South Carolina, then the second largest city in the South, had the most regimented system of slave badges. Between 1783 and 1789, the city also produced “freedman’s badges” as proof of a free Black person’s status.

Abolition tokens were distributed before and during the Civil War, and while post-war medals celebrated the Emancipation Proclamation, few commemorated the plight of slaves or the accomplishments of Black people. For the next century, the government produced no medals dealing with African-Americans, and private issues focused largely on bravery in World Wars I and II.

It was only after the Civil Rights Movement (1954-1968) that pieces were created honoring and celebrating Black Americans, especially Dr. Martin Luther King, Jr. In 1977, Singer Marian Anderson became the first African-American to be awarded the Congressional Gold Medal. Subsequent recipients include Jesse Owens the Little Rock Nine, Louis Armstrong and Rosa Parks. Private pieces were made more for popular consumption than for collectors and are generally of lower quality, meaning African-Americans are still underrepresented in the medallic world.

Modern medals commemorate influential and often forgotten African Americans, particularly in music and athletics. Long-neglected contributions in other areas have been addressed in recent years. Artists inspired by recent events produce pieces that express grief and hope in the ongoing effort to achieve racial equality. 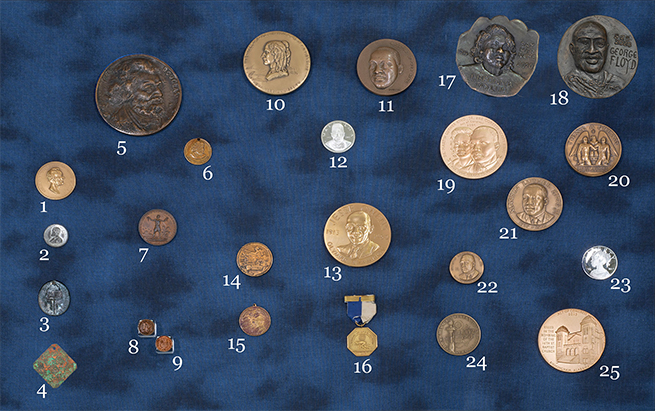