The American Colonial experience with medals is outlined in a book famous among medal collectors – American Colonial History Illustrated by Contemporary Medals. Written by Charles Wyllys Betts (1845-1887), it was published posthumously in 1894 by his brother Frederic H. Betts, William S. Appleton, Lyman H. Low, and William T. R. Marvin. It is considered one of the great works of American Numismatic literature and has been used by collectors as a guide in forming their collections.

As the title suggests, Betts lists medals that refer to or were related to the history of the American colonies regardless of their origin. Beginning with Spanish medals of the 16th century, references to America gradually became more common among the medals issued by various European powers. The 18th century saw a great increase of medals related to the wars between colonial powers, their colonists and the native populations. Victories and battles were celebrated, peace and prosperity commemorated – leaving a rich medallic legacy.

The first medals relating to the New World were issued by the Spanish and are part of the Betts-1 through 12 medals collectively known as the NOVI ORBIS, King of the New World medals. Displayed here, Betts-1 is the earliest of the group, issued to celebrate the accession of Philip I as "King of Spain and the New Western World” – the first time that title had been used - while his father, Charles V, remained Holy Roman Emperor. 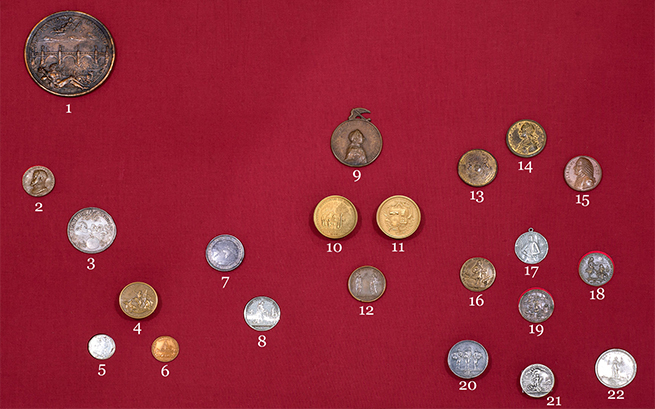