“Few inventions could be more happily calculated to diffuse the knowledge and preserve the memory of illustrious characters and splendid events, than medals” – Colonel David Humphreys, American veteran

The above quote expressed the sentiment that inspired the Continental Congress when in March 1776, it approved the issuance of a gold medal to honor George Washington for driving the British from Boston. This medal inaugurated the Comitia Americana series issued by the infant United States to honor its military leaders. The eleven medals have traditionally also included the incomparable 1783 Libertas Americana medal, which was commissioned by Benjamin Franklin to commemorate the victories at Saratoga and Yorktown. These medals celebrated the heroes of the nascent nation and advertised to the world that the U.S. had defeated the world’s premier maritime empire.

As the U.S. lacked the capability to produce the medals envisioned by Congress, Minister to France Benjamin Franklin was asked to explore the possibility of having them made in France. French medalists were renowned for their skill and Franklin was able to enlist some of the finest to engrave the new series: Pierre-Simon-Benjamin Duvivier (1728-1819), Nicolas-Marie Gatteaux (1751-1832) and Augustin Dupré (1748-1833). Just one American engraver, Joseph Wright (1756-1793), was selected to produce a medal, at the recommendation of Thomas Jefferson. Production was delayed until after the conclusion of the Revolution, and most of the medals were not received until a decade after the events for which they were awarded. With the founding of the U.S. Mint, some of the dies were sent to America while reproductions were later made of all original Comitia Americana medals for sale to the public. 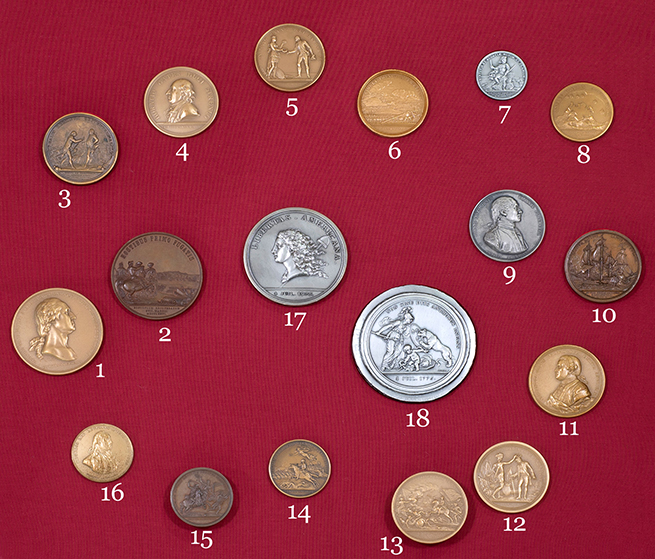